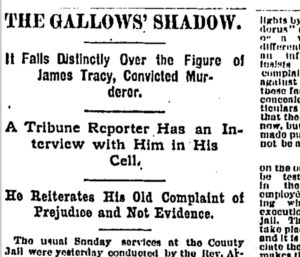 And so, in 1882, an experiment was tried. When James Tracy was convicted of murder after shooting a man during a burglary, he was a remarkably good sport about the whole execution, even though he insisted that he was innocent. He stood on the scaffold and said “I thin it’ll hold me,” then shouted “Good-bye, kids!” to other prisoners, with whom he’d become quite popular. He spent the morning signing autograph cards with his birth day and death day added under the signature.  On the scaffold, before the reporters and officials, he said, “I have no statement to make further than the fact that I am innocent. In a few moments I shall stand before my Maker. Were any man under these circumstances guilty, he would acknowledge it. Innocent as I am, I have no fear to die. I die an innocent man. Truth is mighty and will prevail. I have done.”

It was when they took his body down after the hanging that things got weird.

There had been whisperings that maybe the convicts being hanged were not fully dead when taken down. If they weren’t, that would have led to some odd legal complications. And so, an experiment was tried. Three attending physicians, Drs. Danforth, Bowers, and Haines, took Tracy’s body into a nearby bathroom, rigged it up with electrical wires, and tried to see if they could bring him back to life!

Here are the results of the experiment, as published in a local paper:

“Tracy was pronounced dead by the county physician about twelve or fifteen minutes after the drop fell, but the body was allowed to hang five or eight minutes longer.  Immediately after the body was taken down, we commenced our experiments with electricity by applying one pole over the spinal cord and other over the heart, the latter by means of three needles, one over the apex and two over the (illegible) of the heart, the needles being inserted beneath the skin so as to bring the electrical current in direct commnication with the heart.
Upon turning on the current the effect was very marked. Muscular contractions began wherever the electricity’s current was reached, but most especially in the face and neck. The heart began to contract feebly but regularly; with the ear over the heart we could distinctly hear or rather feel the heart’s contractions.
By mining the electrode we would very easily produce a variety of facial expressions; the arms would contract, the legs moved with considerable force, and the muscles of the abdomen contracted strongly. The most significant fact, however, was the rhythmic action of the heart, notwithstanding the neck was unmistakably broken.
It is probable that a considerable proportion of the criminals who are executed in this country are either mechanically strangled – that is, “choked to death” – or killed by shock that is made on the nervous system. In other words, the neck is not broken, and the spinal cord is not lacerated. In such cases we are of the opinion that resuscitation would not be impossible, that electricity frictions, artificial respirations, the hot bath and other well known means of resuscitation might result in resuscitating the criminal.
If such a case would occur would it not be the duty of the proper officers to repeat the execution? In the present case, resuscitation was impossible as the neck was broken and this leads us to (believe that the sheriff and physicians)  performed their unpleasant duty in a manner worthy of all praise; the arrangements were admirable and admirably carried out.”
In layman’s terms, they got Tracy’s heart to beat, and they managed to make him look like he was smiling, frowning, and perhaps smelling a fart, but his neck was broken, so full revival was impossible. Still, some convicts choked to death and never did have their necks broken. Could they have been brought back?
A few other attempts were made to revive hanged men over the years, though never in the same official capacity – I’ll repost a story or two here this week.
For more stories like this, see FATAL DROP: TRUE TALES OF THE CHICAGO GALLOWS (revised kindle edition) (Weird Chicago)