When you’re walking down to the UPS store and see a bunch of guys in chicken suits crossing the road, you should pretty generally go see what’s going on. I crossed the road myself and saw a bunch of costumed guys and decorated shopping carts.

I had stumbled onto The Chiditarod, which was described to me as part costume contest, part talent show, part food drive, part pub crawl, and all awesome. My distaste for running pub crawls in my Weird Chicago days was legendary, but this is one I can get behind! Scattered between 11 bars in the city, 165 teams are competing this year. They’ve raised something like ten TONS of canned food. How wonderful is that?

The creativity I saw from some crews was astounding – it was like Odyssey of the Mind for adults!

This is Roger McCubbins and Kip Burgess, who came in full Doctor Who regalia with their Tardis-themed shopping cart. Check out Roger’s Tumblr! 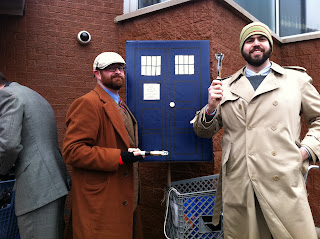 And here’s some video footage of the line: