In 1897, there was a rash of “airship” sightings throughout the midwest – the mysterious, cigar-shaped craft arrived in the Chicago area in April of that year, and was seen by so many people that one claimed “you aren’t ‘in it’ if you haven’t seen the airship!”

Stories about it got more and more bizarre. One guy said he saw it land on the water, and some guy came out onto a deck to go fishing. Another claimed that it landed in a field near his house and the pilot told him that “I will tell my story to the government when Cuba is free” (keep in mind, this was the era of the Spanish American War, a war noted for the stories newspapers made up to push America into the war in order to sell more papers – this was probably one of the more ridiculous ones).

To this day, no one knows what the airship really was. Most of the sightings were probably mistakes, and others were outright hoaxes. A few remain unexplained – theories at the time included that it was Venus, a shooting star, a guy in a balloon, or something cooked up as a publicity stunt by the Ringling Brothers (who didn’t nothing to discourage this rumor – it was just good business). And only in Chicago, as far as we know, did anyone photograph it.

Newspapers at the time weren’t set up to publish photographs – they just did drawings. So they published a drawing of the photo: 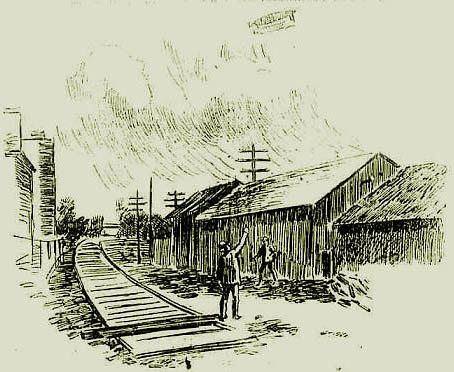 Though papers indicate that the photographer sold several copies, no photo seems to have survived. The negative was given the “acid test” by the paper, which pronounced it to be genuine. However, the Tribune showed it to an expert who laughed at once and said the perspective was way off – what the photographer had probably done was take a picture, then paste the airship onto the picture, and then take a picture OF the picture. This would have stood up to the acid test, but not to expert photographers who knew just what cameras could and couldn’t do.

Still, the mystery of the airship remains unsolved.