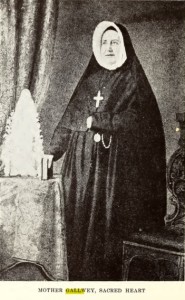 In 1892, when city officials were debating whether or not James Couch could be buried in the family tomb that had been left behind when City Cemetery became Lincoln Park, it was noted that burials were not allowed in the city on grounds not specifically set aside for burials. Chief Sanitary Officer Hayt noted at the time that one exception had been granted: the seminary on Taylor Street was allowed to bury its members on their property.

A bit more research showed that this was the Sacred Heart seminary on the 1200 Block of West Taylor, a part of the nearby Holy Family parish. The nuns there were semi-cloistered, meaning that they were only allowed to leave the grounds when absolutely necessary. This didn’t happen much; according to a history maintained by Woodland Sacred Heart (pdf link), when the order was moved in 1907, the last sister to leave had not set foot off the grounds in 41 years. Nuns couldn’t leave for things so frivolous as funerals, so they asked (and received) permission to continue burying members in a private cemetery on their grounds.

Both the seminary and its burial ground are long gone. The space where the building stood is a blank space now, and the bodies were removed in 1907, after the order of nuns moved to Lake Forest.

But here’s the thing: according a Tribune article from October 13, 1907, when they moved the bodies,  two of the nuns had turned to stone.

Most of the nuns buried on the grounds were moved with little trouble, but it was a different case for Mother Galway, who had founded the school for girls on the spot (it eventually became the Academy of the Sacred Heart), and Mother Gauthreaux, who had died just months after the Great Chicago Fire (her obituary tells an amusing tale of her trying to call a street car after the fire to help her round up homeless nuns; in her cloistered life she had no idea that street cars were bound to tracks and couldn’t simply come to her door and go where she told them to).

Both of these women had been buried in metallic coffins, neither of which had held up very well under the ground for 40-50 years.  But both were far heavier than anyone expected, requiring eight men to lift them. To determine why they were so heavy, the workers opened them up. Here’s what the Tribune said they found:

There was the body of each woman almost exactly as it had appeared the day the casket had been closed and lowered into the earth beside the seminary. When a member of the Ladies of the Sacred Heart is buried she is clothed in the same black habit she wore during life. Instead of the silver cross on her breast a small wooden one is placed there…then the folds of the black veil are carefully drawn across the face of the dead nun.

When the wondering nuns looked upon the bodies of Mother Galway and Mother Gauthreaux the little wooden cross was gone with the passing of the years, and the features looked upon for the last time when the veil was placed over the face were no longer visible. But the outline of the figures was there as perfect as ever. Every line of the body that had been visible twenty years ago was stil there, and the color of the black habit gave a somber hue to the solid figure weighing more than 1000 pounds, where both the women had been but slight in stature during life.

For a moment the nuns of the institution were allowed to contemplate the wonders nature had wrought with the bodies of their predecessors. They saw the familiar white cap had crumbled away, as had he texture of the habits, leaving only a solid figure as if hewn out of ivory. Then the bodies of these dead nuns were incased in new caskets, and they were born to Calvary (Cemetery) to the little plot where the sisters of the institution now bury their dead.

For all the details, this isn’t a particularly good source. The Tribune article doesn’t really specify when it happened (it merely says “recently”); most other local papers from the same date don’t mention anything about the story (at least not right away). It’s also notably lacking in first-hand quotes, and sounds like it may be a second-hand story.

(UPDATE 2019: a newly-digitized Chicago Daily News article from Oct 12, 1907 provides more details, specifying that the exhumation took place the second week of October, 1907, under the supervision of undertaker M. McLaughlin, 416 W 12th Street. It doesn’t give quite so many details of the condition of the bodies, but says that eight men were required to lift the coffin, and eve included some speculation that it was the result of water in the soil in the convent, which had only twelve total burials. Though the article uses the phrase “turned to stone” and “petrified,” it doesn’t include any description of the bodies, only a note that they were in metal coffins)

There are, of course, many explanations for why this sort of thing might happen to a body, the most common being adipocere, which is also known as “grave wax” (see Bess Lovejoy’s essay “The Madame Who Turned to Stone”), but at a thousand pounds each, that’s a lot of grave wax. And I’m a bit surprised that this story isn’t better known, given the Catholic fascination with “incorruptibles” (a colleague of mine just did a photo essay on these for Atlas Obscura, and then there’s the Chicago story of Julia Buccola-Petta, the Italian Bride). The Tribune‘s story was in several papers around the country in late 1907, but it’s hardly been spoken of at all since.

Except for one week, eleven months later, when sightings of Mother Galway’s ghost attracted huge crowds on Taylor Street. Who came with guns.

After the nuns vacated the old seminary, it was set to become a Jewish facility in 1908. Just before the facility opened, rumors swirled that the old place was haunted (what abandoned convent isn’t?), and things came to head on September 18, when a crowd that the Chicago Daily Inter Ocean estimated at 5000 crowded the space outside the iron fence. Some said that they saw ” a pale, bluish, ghostly light suddenly glow in an upper window and then slowly begin an eerie journie, flashing from window to window down the long, faded facade of the old convent.”

The Jewish caretaker and his wife rushed out of the building, with the man crying “It is a spirit! I saw it with my eyes. Far down a corridor I saw the shadowy figure of a woman in black with a lamp in her hand.”

This light had been seen for the past three nights, as well. It was the general belief of the crowd that it was the ghost of Mother Galway, expressing a protest that the school she founded was about to become a Jewish orphanage. The Inter-Ocean noted that her body had recently been found to be turned to stone.

Now, something you see in a lot of ghost stories from this era is that when people saw a ghost, their instinct was always to shoot at it; indeed, the most important tool in a ghost hunter’s arsenal in those days was a pistol.  One would think that they’d at least think twice about attacking a ghostly nun, but when the “ghost” appeared in a second floor window on the Taylor Street side, the crowd began throw anything they could find at it, eventually smashing a window and possibly firing guns.   Patrolman Frank J. Fournier entered the building expecting to find a practical joker or optical illusion, but found nothing but darkness.

By this point, around dusk, the crowd was blocking the street cars, and a riot squad was called in to get them to disperse.   The Examiner, the only other paper that seems to have taken any notice of the mob scene at all, still suspected a practical joker.

The Chicago Hebrew Institute (which was not exactly an orphanage, really – more fo a youth center) opened shortly thereafter.  The building was badly damaged by fire in 1910 and rebuilt; the organization moved to Lawndale in 1926. I haven’t yet found what became of the building in the end, but it’s a vacant lot today.