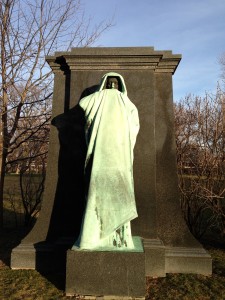 No one who visits Graceland Cemetery in Chicago can fail to notice Lorado Taft’s “Eternal Silence,” the statue of a hooded figure that stands over the plot of Dexter Graves and his family. Even official documents from the US Department of the Interior describe it as “eerie.” So iconic is the image that in 1968, Claes Oldenburg even drew up a proposal for a  skyscraper on Michigan Avenue that would look just like it – imagine how eerie a one thousand foot version would be! (Oldenburg was probably just being fanciful with the design).  It would be a failure of the citizens of Chicago if there weren’t any strange legends about it, although, frankly, the ones we have leave a bit to be desired. Some say that you can’t take a focused photograph of it (which was probably a better legend before digital cameras made it easy to disprove), and others still say that if you look into its face, you will see your own death (a good legend that, again, is simply too easy to disprove).

Even most of the more factual information about it that has been published is a little inaccurate, and leaves out a lot of interesting stuff about the Graves family. For one thing, nearly every article about it says that it was commissioned by Henry Graves, Dexter’s son, in 1909, which is a little inaccurate, since Henry had been dead for two years by then (it was probably by Henry’s cousin, also named Henry Graves, who was one of two executors of the estate). And it’s seldom mentioned that Dexter (and a few of the other family members) died over a decade before the cemetery was even founded – they would originally have been buried in the City Cemetery where Lincoln Park is now. What sort of plot they were in there,  when they were moved, and whether anything marked current the lot before the statue is not currently known. Henry had no children of his own, and no more bodies were added to the plot after his death. Could it be that Dexter lay in an unmarked grave (or two of them) for seventy-five years before the statue was built?

There’s also some dispute as to the name. While sometimes called “The Statue of Death,” most sources say it’s officially called “Eternal Silence.” However, early catalog entries from art exhibitions where casts of it were displayed called it “The Eternal Silence.”  Since they likely got the information from Lorado Taft himself for the catalogs, the proper name is probably “The Eternal Silence.”

Dexter Graves was an early settler in Chicago, setting up a hotel known as The Mansion House in the loop; it’s a bit of a footnote in Chicago history for having been the site of the first professional theatrical performance in the city (by some measures). His son, Henry, was ten years old when they moved to town in the early 1830s (after a perilous journey with Captain Naper, the namesake of Naperville). His own early adventures are worthy of a post of their own.

Around the time Dexter died in 1844, young Henry built a cottage for himself on 31st street near Cottage Grove (it was he who gave “Cottage Grove” its name), at a time when that would have been little more than dunes on the beach. But times changed. I believe that every researcher who’s ever looked up a map of Camp Douglas, our Civil War prison camp, has seen the site marked “graves”  and assumed it was a camp cemetery, perhaps for cholera burials (I sure did). But it was really the Graves homestead – Henry refused to give up the land, so he and his family simply lived in a house with a POW camp bordering it on three sides.

By 1905, Henry was being advertised as the “oldest Chicagoan.” Though there were a few other contenders, it is quite likely that no one else still in the city had been in town longer than he had.

When he died in 1907, his will contained the provisions for the new plot at Graceland, but reading the will raises more questions than it answers. The will did not call for a statue, but a family mausoleum that would be built at a cost of $250,000. That’s several million in today’s money, so we’re talking about one serious mausoleum here. Elsewhere in the will – a portion that attracted far more press – he also set aside $50,000 for a monument to Ike Cook, a race horse that he may (or may not) have once owned, and who broke a record with a two minute, thirty second mile. The monument was to stand in Washington Park, and would feature a bronze statue of Ike Cook, plus a drinking fountain for horses.

The task of designing to horse monument fell to one Charles Mulligan, and the plan even survived a legal challenge over whether the gift to the city was taxable or not, and a photo of a model for it was published in newspapers. However, as near as I can tell, the statue never came about.

In the two years between Graves’ death and the actual construction of the Eternal Silence statue, plans obviously evolved somewhat. Even when the will was admitted to probate in 1907, newspaper articles now described the plot as a “monument” which would include a plaque reading “Donated and erected by Henry Graves. Born Aug 9, 1821; died Oct 8, 1907; son of Dexter, who brought the first colony to Chicago, consisting of thirteen families. Arrived July 15, 1831, on the schooner Telegraph.”

Eventually, noted sculptor Lorado Taft was brought onboard to build the monument; plaque with roughly (though not exactly) that text is on the back. Taft’s work can be seen all over the country, including several  statues around Chicago – perhaps most notably the 1920 “Fountain of Time,” which features a similar hooded figure (more explicitly “Father Time” in this sculpture, whereas the identity of the figure in the Graves monument is a bit ambiguous). Interestingly, that “Fountain of Time” stands almost exactly in the spot where the statue of Ike Cook was supposed to be. The city first commissioned Taft for the fountain in 1913 – could the similarities in the figures be a result of the city having used some of the Graves money? No connection seems to have been noted at the time, but it sure seems like there’s a missing piece of the story here someplace. I’m assuming that Graves already owned the plot at Graceland, and that his family members from the old City Cemetery had been moved ages ago. Eternal Silence is a great work by a sculptor who was very famous, but I can’t imagine it cost $250,000. There must have been money left over.  This is one for my “learn more” files, and another story to tell on cemetery strolls.

One thought on “The Strange History of “Eternal Silence,” Graceland’s “Statue of Death””