On Grand, near Racine, about a block and a half from the site where Tony Genna was killed (see previous post) stands the Bar Casablanca, a Mexican restaurant and bar. Here’s the front of it: 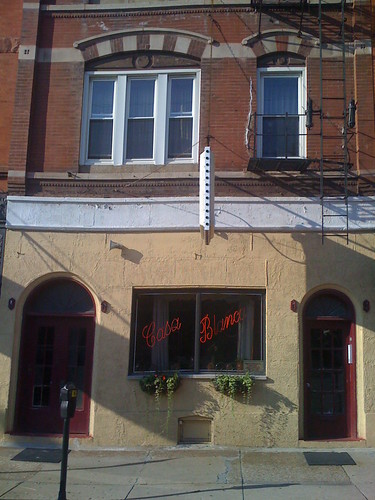 You wouldn’t know it now, but this was the site of the De Cola funeral home which was, according to one local resident, the site of a veritable who’s who of mafia funerals. Certainly it was the funeral home of choice for the Terrible Gennas. At the time, mob funerals tended to be insanely lavish displays – the equivalent of millions would be spent on flowers.

But Tony’s wasn’t like that – his body laid on the slab in the morgue at the place for a while before a very simple service was held, attended only by family. He was, however, given a $5000 coffin. About 30 or so people attended the burial at Mt. Carmel, the suburban cemetery where Capone himself ended up buried. Only one person – apparently Tony’s sweetheart – was seen to sob.

Capone was said to have been the one who ordered Tony’s death, but the police had no leads, and didn’t really seem to care. The papers said there was a lack of interest down at the police station, where the police were perfectly happy just to know that he had been buried without any further gang warfare flare-ups.

Much more information on gangsters can be found in our book, of course!

I’m going to endeavor to put something up here daily between now and Halloween – several posts are being prepared in advance, since we’re AWFULLY busy in October. If you have any subjects you’d like covered on here, let me know!