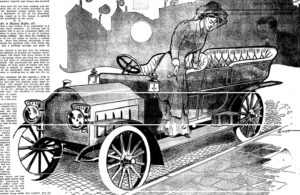 “Does anybody know the woman in green?” asked the Tribune in  November of 1908. “Can anybody tell the name of the mysterious woman motorist who for the last month has been an unfailing topic of conversation for those who have time to observe humanity as seen in Chicago’s streets? Who is she?”

For a month, Chicagoans had been observing a woman, roughly 30 years old, driving around the loop in a rented green touring car, dressed from head to foot in green, including a green hat and veil (except for a couple of days when she tried red or white outfits, each time with a matching car). Each day, she’d drive a circuit through the loop, occasionally stopping for some sort of meeting in the Marquette building. Once in a while she’d have a chauffeur, and once she nearly drove off the road, having been agitated by the sight of a certain man with a black mustache, but she was otherwise said to be perfectly capable of handing the car herself – the paper noted that she “handles her machine in a manner which shows her mastery over the art of chauffeuring”

In the Tribune’s 1908 feature, one gets the impression that they could have solved the mystery easily enough – she went to the same garages and drove the same route daily – but preferred to revel in the wild, romantic backstories people were inventing for her. It might seem odd today, more than a century on, to imagine that someone driving around could create such excitement, but we have to remember that this was 1908. Cars weren’t quite the novelty they’d been a few years before, but they were still in their infancy. Female drivers might have been a bit of a shock to some, as well. The veil, the tendency to match her outfit to her car, and her taking the same route daily were about all it took to attract attention.

It may be, though, that the real story was wilder than the Tribune dared to hope.

In January, the Inter-Ocean began telling stories of a “Widow in Green” who’d been blackmailing wealthy hotel guests. The Inter-Ocean certainly thought it was the same woman; stating that there was a small gang of blackmailers operating “under the leadership of the ‘woman in green,’ who created a furore among residents of the Michigan Avenue hotels by appearing each day dressed entirely in green. A large green touring car was constantly at her beck and call.” 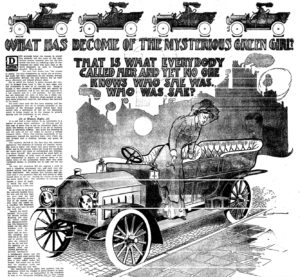 The “Widow in Green,” it was said, was “a beautiful brunette, very attractive and a good conversationalist (who) speaks with a slight French accent.” She would scan the registers of Michigan Avenue hotels, find wealthy men who were in from out of town, and then seduce them in the dining rooms with her brilliant powers of conversation (though the “seduction” may have amounted only to go to their hotel rooms to discuss an investment plan for the money she claimed to have inherited, with her simply signing into the hotel as the man’s wife). Later, the wealthy men would receive letters demanding money, always signed with the single name “Gladys.”

Stories of Gladys the Green’s life of crime spread quickly – there were tales of her having a fist fight with the woman who owned one of the hotels, of her forging a check at another hotel. Though saying she was part of a “gang” might have been overstating it, she did employ a couple of “attorneys” who dealt with unruly victims, and who helped her draw up bogus mortgages to sell. To one victim, she sent a valentine showing a man being beaten with a rolling pin; the back read “I hope the new year will bring you as much happiness as you have brought me unhappiness – Gladys.”

The man who received the card told the press (through his attorney) that he’d remained silent and paid a fortune up until now “because his wife and children had been heretofore unaware of his escapapde with the dashing ‘widow in green,'” whom he’d met at the Lexington Hotel.  But his attempts to find her seem to have been in vain.

The flair for the dramatic may have been her undoing – though most papers in town barely mentioned the story (to my surprise – it seemed like the kind of story the American would have been all over), the Inter-Ocean covered it in several articles over a week or so in January, 1909, and several out of town papers picked up their coverage as well. With her newfound fame, the Widow in Green’s cover was blown, and operating in town likely became too risky. She presumably took off for parts unknown, and her story disappeared from the papers. So far as I know, she was forgotten by the end of the winter.