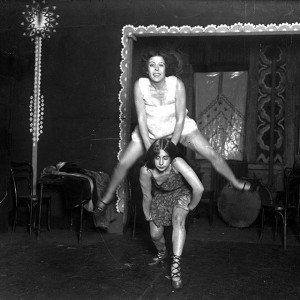 The facts are these:

Lillian Collier (sometimes spelled Collee, or even Kelly) came to Chicago around 1920 from Greenwich Village, intent on converting Chicagoans to “real life.” Only a teenager by most accounts, her poetry made her the darling of the Dil Pickle Club. Some accounts say she had previously been a circus performer.

On arriving in Chicago, she founded a bohemian tea room called The Wind Blew Inn at Ohio and Michigan (where the Eddie Bauer store is now), where she held open forums, art exhibits, poetry readings, and more. The place was not popular with the neighbors, who complained about the jazz music, or the police, who thought that any tea that cost 75 cents had to have liquor in it (which it surely did), or with local parents, who feared that their children were attending “petting parties” there.

The place was raided by cops, and Collier was forced to put overalls over the Greek nude statues. On the stand in trial, she said there was nothing stronger than hot chocolate served at the place, and that “there is no snugglepupping at the Wind Blew Inn.” We here at Chicago Unbelievable are trying to bring the term “snugglepupping” back (along with its variants “Snugglepuppy,” a girl who enjoys snugglepupping, and “snugglepup,” the male equivalent.”)

The judge, in what should probably be considered a landmark case, sentenced her and her “aide,” Virginia Harrison (modern commenters generally assume she was her girlfriend) to read a book of fairy tales to cure her of her bohemianism. A month or so later, the Wind Blew Inn caught fire, the victim, Collier was sure, of puritan arsonists.

The place moved to a new, fancier location on LaSalle, but, lacking the grit and charm of the original, it soon tanked.

A few years later, in 1924, Collier was featured in a major national article about flappers in which she stated that flappers were not savages, but pioneers of new freedom for women. In the article, she comes across like a proto-feminist.

But here her trail ends. Various clues to her whereabouts around this period have popped up here and there – she was arrested for embezzling a bit, and may have been considered for a role in a Charlie Chaplin film. Another Wind Blew Inn, which may or may not have been related to the first one, opened for a while in New York.

There were many people named Lillian Collier who showed up in the press therafter – a poetess in Canada, a suffragist in Texas, and a NY socialite who married an Olympic fencer who promptly died in a zeppelin crash (I thought this was the best lead, but the marriage certificate indicates that the NY Lillian Collier was probably too young to be the Chicago one). None seem to be the same Lillian Collier who took Chicago by storm. Actual records of Collier herself are hard to come by, partly because we aren’t at all sure that Collier was really her name (it seems to have been pronounced more like Collee or Colley, in any case).

So we’re putting out an All Points Bulletin on information as to whereabouts of Lillian C after 1924. Was she your grandmother? Your great aunt? Did your mother know her? Was your great grandmother, the old lady in the home who watched a lot of Lawrence Welk and always asked if your crops were in, even though you work at the bank, a snugglepuppy? Let us know! Any leads are appreciated.

Update: some detective work has led us to much more info about Lillian, who died under the name Nellise Rosenfeld in 1981 after a long career as a playwright and mystery novelist.