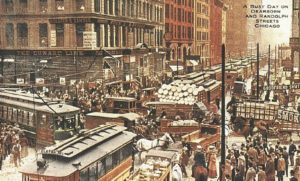 Note: This article was first published Mar, 2013, and revised in Sept, 2017 – more newspapers are being digitized all the time, making searches for the term more fruitful!

One of the questions I get asked the most is “Why do they call Chicago the ‘windy city?'” And the truth is, I have no freaking idea. No one does, honestly.

Most Chicagoans grow up hearing that it referred to the politicians being full of hot air – sometimes you hear it was specifically due to their efforts to secure Chicago as a world’s fair site, and was spread by jealous New Yorkers. A couple of tour companies seem to be particularly into that angle. And “windy” was certainly a common term for someone who was full of hot air in those days.

In reality, though, the term appeared in newspapers well before then, and seems to have been in common parlance by the 1870s, well over a decade before the World’s Fair bargaining started.

The earliest known mention of Chicago as a “Windy City” came in 1858, in a Tribune article about local youths hoping to be called up to serve in the Utah War, a fight (which ended up having no battles) between the U.S. government and Mormon settlers. It seemed as though they weren’t going to be called up in April 1858, and a Tribune writer said “A hundred militia officers, from corporal to commander, condemned to air their vanity and feathers only for the delectation of the boys and servant girls in this windy city. Soldiers in the army of Utah, a thousand centuries command you to – go to work! That will cool your valor.”

Many articles pinpoint that one as the earliest use of the phrase, but it it’s sort of a false positive, in that he isn’t using it as a nickname or implying that Chicago is known as “the Windy City.” What the heck the author was on about is an open question; it being April, he was probably just using the phrase because it happened to be windy that week, the way one might call Chicago “this snowy city” in January.

The first time I can find it as a nickname is in a Harrisburg Telegraph article from December 5, 1867, when Edward Weston, a popular pedestrian who often made headlines with his long walks, completed a trek from Portland, ME to Chicago. The headline noted that he had arrived in “The Windy City.” The article didn’t elaborate on what they meant, but it’s worth noting that it sure sounds like they were using nickname that was in common parlance.

An August, 1869 issue of the Cincinnati Gazette mentioned that lots of people from Dayton were going to Chicago “to take a look at the windy city.”  The St. Louis Democrat used the same term in December of that year.

In in 1874, the Cincinnati Gazette was at it again, calling Chicago “The windy City of the Lake” in an article about Chicago’s method of guessing it’s population by multiplying the number of names in the city directory by 3.5 (which the gazette thought was ridiculous). However, there’s no real origin of the term applied, and it could genuinely refer to the weather as much as anything else.

A few months later, the Cincinnati Enquirer wrote a piece about why insurance companies didn’t want to take risks in Chicago, the “Wooden and Windy City.” They would use the term frequently in the 1870s.  By the end of the decade, the Cincinnati Daily Star was getting in on the act, too. It came up in a few other papers at the time, usually seeming more like an adjective than a nickname, but Cincinnati seemed to like it the best.

It first appears as an actual nickname in the Trib in an 1876 article about baseball. It’s not really the Trib, though – it’s the Trib quoting the Cincinnati Enquirer as saying “There comes a wail to us from the Windy City. People up there are disgusted with their pet White Legs. Louisville is disgusted, too, with its club.”

Only a few weeks later, The Enquirer, actually had a headline entitled “That Windy City” about the tornado that hit downtown Chicago in May of 1876.

It continued to be common in Ohio papers, but spread around further throughout the 1880s. On Dec 19, 1888, The New York World used it as a reference to politics in Chicago and people being full of hot air. In the wake of Carter Harrison’s election as mayor, and a couple of years beyond the time of the Haymarket anarchists, they spoke of Harrison’s speeches by saying “What with Carter Harrison and the Anarchists, Chicago well deserves the nickname, ‘The Windy City.'” (The quote appeared in several other peoples, with many attributing it to the Burlington Free Press).

Use of the phrase DOES seem to pick up around the time of the World’s Fair negotiations in 1890, so it’s probably fair to say that jokes about Chicagoans being full of hot air in their efforts to secure the city as a World’s Fair site helped to further popularize the term. But the 1870s articles make it clear that it was well established as a specific Chicago nickname already – at least in Cincinnati.