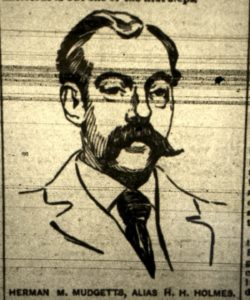 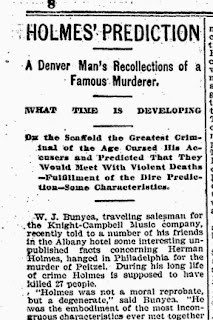 In 1898, the Denver Post ran an article about one W.J. Bunyea, a traveling salesman who’d held court on the subject of H.H. Holmes, an old friend of his, in a local hotel the night before. According to his story, he had been working in Englewood in the general merchandise business. In the midst of recounting the whole of Holmes career as a swindler and murderer, he dropped a few interesting tidbits:

“We became fast friends and roomed together 28 months, until unsavory tales were circulated defamatory to his character and I left him. He came into possession of a magnificent residence…which was called Holmes Castle, which (was held in the name of ) T. Campbell…. I have often congratulated myself on the narrow escape I had from his deadly clutches. He always wanted me to get my life insured and I promised him I would do it, but kept procrastinating. Many a time he has sent me inside of his dark vault for cigars and had I been insured I would have met the same horrible fate that some of his victims suffered.

“After he was sentenced to be hanged who wrote me a letter saying the only person he ever murdered with violence was Miss Collins of Englewood. When I asked him what ever possessed him to lead such a wicked career, he replied: ‘When I was a little boy in petticoats, living with my wealthy and highly respected parents in Vermont….they were swindled out of a large fortune by dishonest city officials, and I made then and there a solemn declaration to cheat everybody I came across and averse the misery my parents subsequently suffered by persecuting innocent people for I no longer have faith in mankind and love has no meaning to me.’

“His last letter to me read: they have me at last, old chap. Will swing tomorrow. If I see you no more in this world I may run onto (sic) you in the next. Yours without a struggle, Herman.”

He then went on to speak of Holmes’s prediction on the scaffold that all those who had opposed him would die violent deaths.

Now, this last part, in particular, is a fascinating addition to Holmes lore and a clue as to what made the man tick – if it’s true. But the problem with Holmes stories is that it’s to tell what to believe. In this case, we have to figure out three things:

This is part of what makes Holmes research so complicated – with nearly every bit of information about him, we have to figure out if the publication is reliable, if the witness is reliable, etc. Even if they are, you can’t really take anything Holmes said himself at face value.

In this case, the story falls apart at #2. The Denver Evening Post seems reliable enough, in that Bunyea seems to have been a real guy, but Bunyea’s own story is full of holes.  He seems very knowledgeable about Holmes on the surface, but he makes an awful lot of mistakes, such as calling Julia Connor (who he claimed to know well) Julia Collins. He also puts her and her daughter’s disappearance at about a year before Holmes was captured; it was more like three years. He also has Minnie and Anna Williams dying at the same time, not several months apart (which may or may not be true, though he also calls Anna “Helen”).   Nearly everything he says, in fact, is off in some detail or another, sometimes far off enough that you can’t just blame carelessness.

But it was stories like this – easily debunked stories made up by far-flung newspapers and tabloids, or by people who may have known Holmes slightly and wanted to cash in on their connection – that form much of the basis of the story of Holmes as it is generally retold today.  As I often say, Holmes was not the Hannibal Lector sort of serial killer he’s often made out to be today – he was more the Walter White sort of criminal in reality, focused more on making money than anything else, but not shy about killing people when it helped him keep his swindles and schemes going.

It seems more likely that Bunyea pieced his story together from newspaper articles he’d read a few years before and didn’t remember quite correctly; the story that Holmes had always tried to get him to insure his life, and would have surely killed him if he had, is one that came up a lot when Holmes’ crimes first came to life. Holmes is generally claimed to have killed a lot of people after tricking them into buying life insurance policies, but as far as I can tell, it would be more accurate to say that he tried to do that a lot. Only Ben Pietzel ever fell for it, and even he thought he was going to be cut in on the swindle for faking his death, not killed.

Furthermore, investigations into Mr. Bunyea show him not to be the most reliable witness in the world, though he IS a fascinating guy to look into. There was a Walter J. Bunyea in Englewood in 1888, and it’s an uncommon enough name that it’s reasonably to guess that it’s the same guy. But we know he was there because he was captured there by a police officer who recognized him as a man who’d recently broken out of prison in Indiana. In 1900, two years after the article, he would be arrested again after shooting a barber five times after the barber allegedly insulted his wife. And Holmes wasn’t the benefactor; he got the money by swindling the widow.

There’s one more fascinating twist, though: according to the paper’s reporting on the subsequent trial (in which he was somehow acquitted), we do see that Bunyea lived in Chicago from about 1888 until 1895, when he and his wife moved to Denver. At one point in Chicago, the couple had apparently had some sort of rift owing to his wife’s involvement with a man named Campbell, which, of course, was one of Holmes’s own common aliases. But the trial’s timeline would put that affair in 1895, when Holmes was in prison in Philadelphia.

The best takeaway from the article, really, is the way that it shows how early stories about Holmes and his castle grew. Much of what you hear about him doing now are things that newspapers speculated that he could have done in the 1890s, when his crimes first came to light, and began to be repeated as fact, not speculation, in the 1940s. I think Erik Larson based his portrayal of Holmes as a modern-day sort of serial killer entirely on the famous “I was born with the devil in me” quote, which was didn’t actually appear in Holmes’ confession at all, but, rather, appeared in “excerpts” that were almost certainly invented wholesale by the Philadelphia North American, a rival to the Inquirer, which published Holmes’s actual “confession” (which, itself, is notoriously unreliable).

But many of the stories of him torturing people in the basement, killing people for the insurance money, making grim predictions on the scaffold or in court (which no witness described happening at the time), were already, from the evidence of this article, a part of Holmes lore in April, 1898, not quite two years after his execution.

For more on our analysis of Holmes’ various confessions, and on the Holmes “curse” stories that were already in circulation before his death, see our Holmes-lore ebooks!