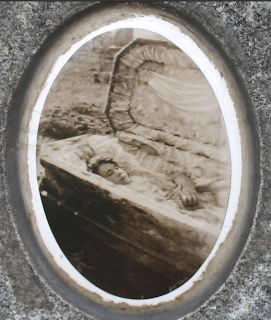 Yesterday, an eagle-eyed reader going by the name of Boatswain wrote to ask if I’d seen the other photo of Julia Buccola, the Italian Bride of Mt. Carmel Cemeter, whose story I covered extensively after finding some new information during book research. I was a bit skeptical right off; the one shot of Julia in her coffin that is displayed on the gravestone is the only known shot of the exhumation.

Boatswain had found another picture while researching incorruptibles, a Catholic term for bodies that do not decompose as one would expect after burial. There was a webpage showing a picture said to be of Jacinta Marto, who died of the Spanish Flu in 1918 at the age of 10, but who has been exhumed and found “incorruptible” more than once (she’s the youngest non-martyr to be beatified). Not being a Catholic myself, I wasn’t familiar with her story, but looked into it. There are a couple of photos of Jacinta’s exhumations,  none of which look anything like the picture Boatswain found, which is below: 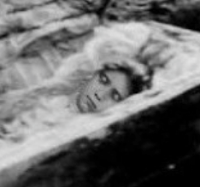 Upon flipping the supposed Jacinta image horizontally, Boatswain found that it was clearly a flipped image of Julia in her coffin. The shading in the folds of the casket, the dirt behind her – everything is exactly the same:

However, closer examination shows that this is not a second shot of Julia, but a doctored version of the first one. First of all, I’m not sure that one could have moved the head in the coffin to the side like that without doing some serious damage, and one would at least expect the folds in the coffin to move a tiny bit. Also, the amount of space between the right eye and the hairline is notably different. Looking at a tilted image of a common photo of Jacinta makes it fairly obvious what has happened here: someone has taken a shot of Julia and pasted on a touched-up shot of Jacinta Marto.

Now, why they would do this is another question. It may be as simple as someone making some clip art (or something akin to Jacinta fan art). It may have been a bit morbid, but perhaps it was never intended to be taken seriously.

Or, well, it’s not as though there’re aren’t any hucksters out there creating fake “evidence” to make money off of religious people while claiming to be religious themselves. Just because someone says they’re religious doesn’t mean they really are. The world is full of “Biblical Archaeologists” who go from church to church claiming they’ve found the ruins of Sodom, Noah’s Ark, or any number of things that they probably don’t even personally believe in. They walk, metaphorically speaking, hand-in-hand with TV evangelists who, I assume, privately think anyone who sends them money is a fool, and with politicians who make a career out of pandering to the religious community by convincing them that their faith is “under attack” because their kids have to go to school with kids of other religions. And so on.

In any case, thanks for the heads-up, Boatswain!

One thought on “An alternate Italian Bride photo debunked”