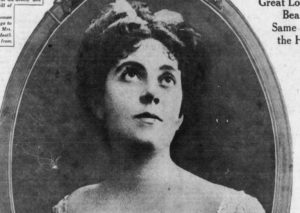 There’s a new post and podcast episode over on our Cemetery Mixtape page about Minnie Wallace, a lesser known Chicago story that’s been occupying my attention the last couple of weeks. She’s usually listed as a “vamp of New Orleans,” but that’s really just where she grew up. She spent nearly twenty years, and may have committed a murder or two, here in Chicago.

Minnie was only 16 when she left her home in New Orleans to marry 49 year old J.R. Walkup, the mayor of Emporia, Kansas. A month after the wedding he died of arsenic poisoning. Minnie was acquitted; he habitually took arsenic pills as aphrodisiacs, and in the belief that they would protect him from STDs. He was quite fond of brothels. After her acquittal, she moved back to New Orleans, and then to Chicago in 1892.

Finding still-extant buildings to trace to her in Chicago is tricky. She lived in the Grand Pacific Hotel for a couple of stints – that was at LaSalle and Jackson, and is long gone. She had a couple of houses on South Indiana Ave, but they’re both gone – she was living in one of them when she married John B. Ketcham, a Toledo millionaire, in 1897. He died shortly thereafter as well, and Minnie was investigated for murder, but never indicted. There was poison in his system, but he, took, took it medicinally. It was alcoholism that killed him.

More than 15 years later, the story takes on another twist: De Lancey Louderback, a Chicago railroad millionaire, fell in love with Minnie. She doesn’t seem to have loved him back, but strung him along for years, during which time he reportedly gave her upwards of three million dollars (in 1910s money – about 50 million today). Around 1914, he even built her an enormous house at 4918 N. Bernard Ave in what was then called Ravenswood (though it’s probably a bit too far north to be called that now).

A big 1918 article called it a “House of Mystery,” where Minnie was supposed to live in a “house within a house” where he could keep an eye on her, and on any man who visited her. How much of this is true is hard to know, as most of it comes from a widely-circulated article from longafter his death that’s a bit . But when it was built, there were a few press mentions of it being a strange “house within a house” design. (It’s gone now, along with the bachelor pad he occupied near Wilson and Broadway.)

Minnie never moved into the place – just as she was supposed to, she sent Louderback a cable saying she’d moved to London and married someone else. A month later, Louderback died of drinking cyanide in the house – after writing Minnie into his will.

It’s hard to blame her for that one (or for the death of her last husband, who died in World War 1), but still – how many suitors can die of poisoning before we decide it’s suspicious?

Here are some shots of the houses from the 1918 article:

Descriptions of the house say that it was a glass shell, with twenty-five feet of veranda separating the outer house from the “house within a house,” but it doesn’t look like glass in pictures. Here’s another cutaway diagram from the Daily News:

The place was sold to a friend of Louderback’s in 1915. In 1929 there was a synagogue listed at that address. Exactly when it was torn down is not known. Some suggest that the nursing home now and the spot is built from the bones of it, though I sort of doubt it.

Minnie appears to have died in California in 1957, having lived a quiet life for nearly 40 years. Articles written about her today tend to assume that she killed her husbands, though I’m less sure myself. And, even if she did, it’s hard not to root for her.

I’ll have a lot more on Minnie coming up – there’s enough data out there to do a book or a long form podcast. For now, though, there’s the new Cemetery Mixtape episode, and some documents will be posted about her on the deep research tier of the Patreon this week!