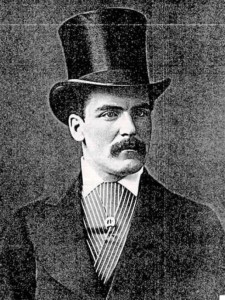 Could a Chicago mystery from 1881 have been the work of one of our early serial killers?
(See an update from 2017 at the bottom of the post!)

On April 9, 1881, 22 year old Alice Montgomery checked into a room at the Sheldon House, a west loop-area hotel on West Madison near Racine. After dinner, she casually asked for a glass of water and a teaspoon, then for directions to the ladies’ private closet. Some time later, another roomer saw her emerge from the private closet writing in agony. Soon, she was on the floor, screaming in pain and convulsing. Doctor Seymour Knox was summoned and gave her ether, but after rallying for a moment she died. The doctor believed it was strychnine poisoning. Another doctor, one Byron Griffin, was soon found who told investigators that Alice had recently come to him saying she was in a “delicate condition” and asking for drugs to induce an abortion. He’d refused – it was illegal at the time, after all.  But a superficial examination of the body confirmed that an abortion had been attempted. She found some doctor who would help her. But someone had apparently tampered with the medicine.

The medicine she had taken was traced to a drug store further west on Madison, and was filled from a prescription from Dr. Fraser. Fraser was located and promptly said the drugs she’d been given were probably used to induce an abortion, but that he knew nothing of the prescription. It wasn’t in his handwriting, and contained some obvious misspellings.

The next day, Dr. Frazer assisted on the most-mortem at an undertaking parlor further west on Madison. It was found that Alice had been pregnant, and traces of strychnine were found (to prove it was strychnine, they fed the traces to a cat, who quickly died). The clerk at the drugstore said he had no idea how strychnine could have gotten into her medicine; it was sealed in a bottle with a skull and crossbones. A coroner’s jury eventually concluded that the strychnine had been added to the medicine later, under circumstances unknown

At the inquest, a letter written by Alice was produced, indicating that she’d paid Doctor Fraser $75 for an operation, and needed another $25 for another, after which she would “be all right.”
It had been sent in the coroner by someone who claimed to know Alice, but how that person came into possession of it was sort of a mystery, as was an accompanying letter saying that it was being sent to clear up the troubles for “Van Minchen,” a name no one had connected tot he case The identity of the person who’d found and submitted the letter was never found.
Dr. Fraser vehemently denied that he’d performed the abortion. The prescription was clearly not his own work, and “anyway, if I desired to produce an abortion, I had the necessary drugs at my own office, and need not have sent a patient to the drug store.”
The coroner’s jury established that Alice had died of accidental use of strychnine, but  exonerated both Fraser and the druggist. How the strychnine had gotten there, and who had done the operation, remained a mystery.

The tone of local newspaper articles from the case – particularly those of the Chicago Daily Inter-Ocean – make it seem quite clear that they assumed Dr. Fraser was at fault. It DOES sort of seem like damning evidence against him.  But Fraser was exonerated, and, since the case was officially still a mystery, it’s fairly remarkable that no one ever noted that one a known serial killer – one whose crimes frequently combined strychnine and abortion – had an office within a stone’s throw of the Sheldon House.

Dr. Thomas Neil Cream is probably a better candidate for the title of “America’s First Serial Killer” than H.H. Holmes, who is usually advertised as such.  Strychnine poisonings, abortions, and blackmailing doctors were his stock in trade. Giving both the operation and the poison to Alice, as well as perhaps trying to frame Dr. Fraser, seem like just the sort of thing he would have done. And Dr. Cream was operating from an office on Madison at the time of Alice’s death, right near the Sheldon House.

Only months before the Montgomery case, in fact, Dr. Cream had been arrested, and eventually released due to lack of evidence, when a woman named Mary Faulkner died after an abortion. Both Dr. Knox and Dr. Fraser were involved in cases with Cream in 1880-81.

I almost feel as though I must be missing something here. Given the publicity of the case connecting Dr. Cream to the abortion/death of Mary Faulkner in 1880, and his proximity to the scene of the action, it seems as though someone would have mentioned him during the Alice Montgomery affair, though neither the Tribune or Inter-Ocean ever mentioned him in connection with (all above info on her is from their April, 1881 accounts)

And given how much publicity Crem got a few months later when he was arrested for the poisoning of Daniel Stott, why did no one think they’d found a logical suspect for Alice’s murder?  Later accounts of Cream, including a full-length book about him from 1995, make no mention of the fact that there’d been a high-profile mysterious abortion/strychnine-related death in his neighborhood only months before his arrest. Indeed, I don’t think anyone ever mentioned Alice in print again after the April, 1881 inquest.

After his November, 1881 conviction for the murder of Daneil Stott (whose wife had obtained poisons to use on him from Dr. Cream’s office), Cream went on to spend several years in prison Joliet before being released and going to London, where he resumed his career of poisoning, blackmail, abortion and murder. He was eventually convicted of killing a woman with strychnine there and hanged; an apocryphal story states that he admitted to being Jack the Ripper before he was hanged, and I’ve long suspected that a 2008 podcast in which a former parter of mine mistakenly attributed that story to H.H. Holmes was the beginning of the current vogue to connect Holmes to the Ripper murders.

Digging through the defunct Chicago newspapers in the microfilm room gives some clue: the most likely time for someone to have made a connection between Cream and Montgomery would have been in late July, 1881, when Cream was first made a suspect in the murder of Daniel Stott, or in September of that year when he went to trial. In July, any mention of Cream at all was buried among the coverage of President Garfield having been shot. In September, Cream’s trial coverage was overshadowed by Garfield’s funeral (he lingered on his deathbed for several weeks after being shot). According to Amanda Griffiths-Jones, there’s even a note in Cream’s prison records saying that authorities were distracted by Garfield news and not taking much note of Cream’s actions at the time of the Stott murder. So it may simply be that the obvious solution to Alice Montgomery’s murder slipped through the cracks.

And, since we can never resist an H.H. Holmes connection: according to an 1895 issue of the Chicago Daily News, when H.H. Holmes was en route to Toronto with the Pitezel girls, he stayed a night in room 18 and 19 of the West End Hotel, which had the same address, and was likely the same building, as the Sheldon Hotel, where Alice died! According to the CDN, he registered as “A. Armstrong.” Other papers were not convinced that this part of the story was true, though, and at this point whether “A. Armstrong” was truly Holmes is probably anyone’s guess.

UPDATE, 2017:
As more newspapers get digitized, more sources come to light! I knew I couldn’t have been the first to connect Alice to Dr. Cream, and it turns out the sheriff in charge of the jail where he stayed before his 1881 trial blamed him for the murder. Here’s The Belvidere Standard, a paper from near Grand Prairie, quoting the Rockford Register on Sept 13, 1881: 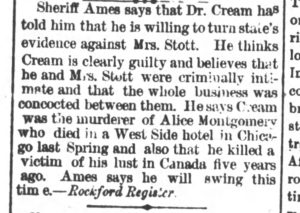