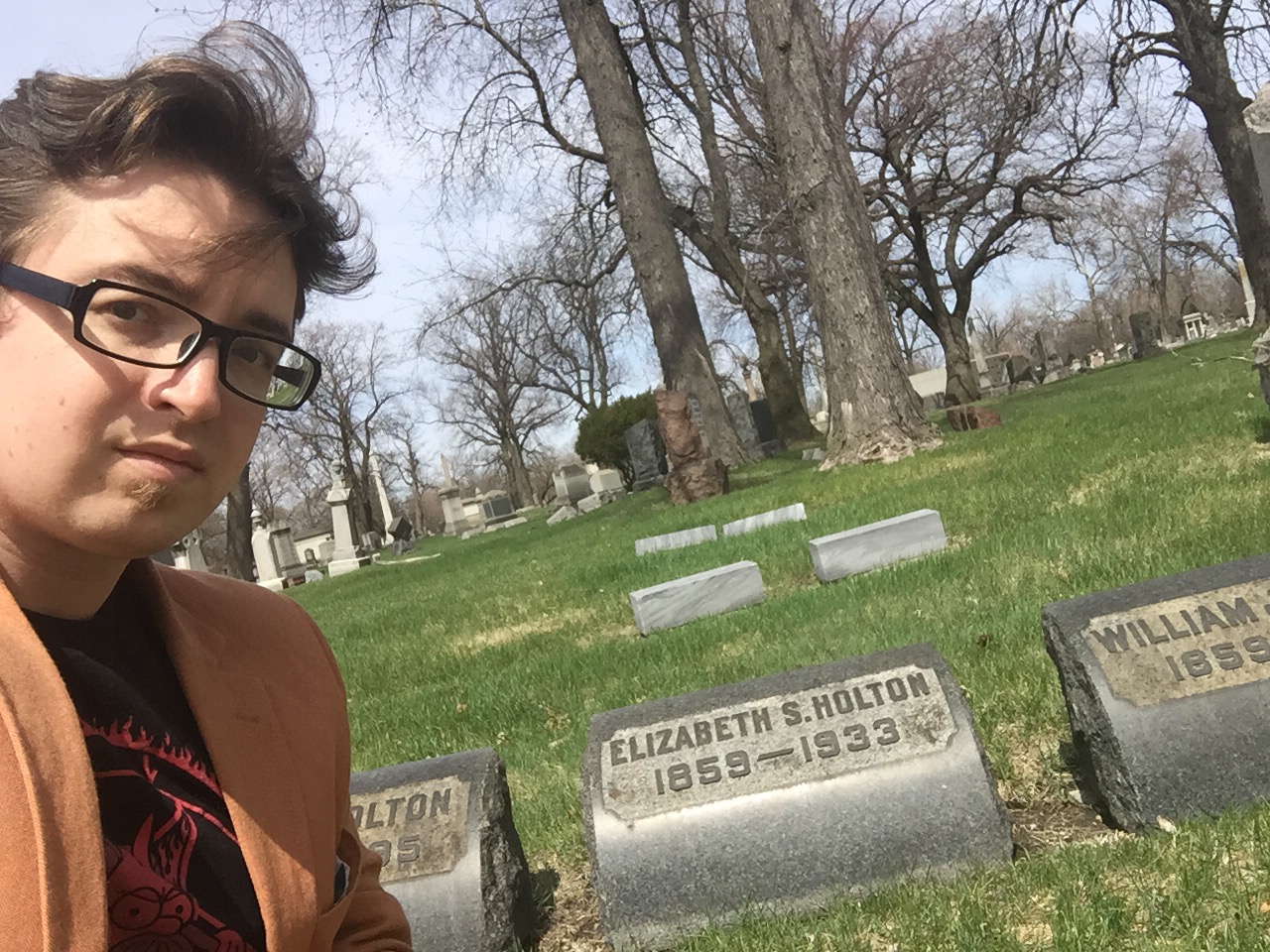 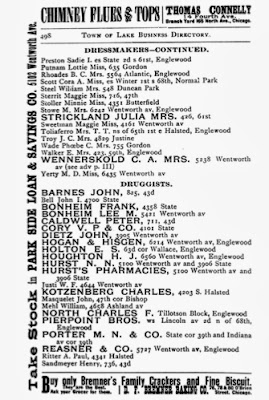 When H.H. Holmes first came to Chicago, circa 1885-7 (depending which source you’re using), he took over Dr. E.S. Holton’s pharmacy at 63rd and Wallace, across the street from the spot where he’d one day build his famous castle. The commonly-told version of the story is that Dr. E.S. Holton was an old man, dying of cancer. When he died (or perhaps was killed), Holmes took over the store, buying it from the over-burdened Mrs. Holton, who was in over her head trying to run the drug store herself. She eventually tried to sue for non-payment, but eventually dropped the suit and moved to California. Practically everyone has assumed that Holmes actually killed her.

Or, anyway, this is the story as it appears in most modern Holmes books, such as Depraved and Devil in the White City. The source of it is tough to determine.

In 1894, when papers were publishing breathless accounts of Holmes, the Master Swindler, the Tribune mentioned that he had come to Chicago in 1887 and bought a pharmacy from a “Mrs. Dr. Holden” in Englegood, and suggested that local gossip had it that he had been sued for nonpayment, though the story had fizzled out after a while. The Chicago Mail said that Dr. Holton had trouble getting the money from Holmes, but eventually did so. Then again, the Chicago Mail was the sort of five page tabloid that ran a lot of stories about sea serpents, naked corpses, and people who found amusing ways to kill themselves. Not exactly the most reliable of sources (though it’s darn entertaining to read now).

Speaking of unreliable sources, Holmes himself said that when he came to Chicago he bought a pharmacy from an unnamed physician who badly wanted to sell it due to ill health. In 1895, Roger Corbitt specified that the druggist was named EH Holton in his self-published book on the Holmes Castle.

By 1898, people were telling the story that he’d swindled the old woman out of the place and that she’d afterwards disappeared. This is about all of the early data I could ever find on the story. The exact date at which this all happened is variously given from 1885-87.

Later writers, including Erik Larson in his Devil in the White City and back as far as the 1970s, have generally pieced the story together from this data and told a lurid tale of Holmes arriving in Chicago, where Mrs. Holton was in over her head trying to run a pharmacy on 63rd while her sick husband, the doctor, was an invalid, slowly dying of cancer. In most books on Holmes, he takes over the management of the place, and Mrs. Holton eventually sues for nonpayment, but then abruptly drops the suit and disappears. Holmes, in most versions, tells curious neighbors that the Holtons have gone on a trip to California. Most broadly hint that Holmes probably killed them, and his killing of the Holtons is now a pretty standard part of Holmes-lore.

Lacking any death certificates or anything, and with little about E.S. Holton available besides a listing in a couple of city directories establishing that there really was an E.S. Holton’s Pharmacy at 63rd and Wallace in 1885, it’s been tough to judge one way or the other how true the story was. But an 1880s national medical directory today gave me a first name, and that’s sent me down a little rabbit hole.

Dr. E.S. Holton was neither old nor a man. The E. stood for Elizabeth, and she was only a year or so older than Holmes himself.  Not a great deal is known about her, but we can piece together quite a bit from census forms, her appearances in city directories, etc.

Elizabeth Sarah Holton (nee Sanders) was born in Illinois in 1859. In 1879 and 80, she attended college in Ann Arbor  for a couple of years; she appears in several Michigan alumnae books under the name “Lizzie Sanders.” This would put her in Ann Arbor just shortly before Holmes arrived there to study medicine himself. To complete her degree, she studied Woman’s Medical College of Chicago, the first medical college of its kind in the West, graduating in 1883.

She married William J. Holton in 1882, while still a student in Chicago. Their first daughter, Abbie Marie, was born in July, 1883, just after her graduation (Dr. Holton, age 24, is listed as “Elizabeth Sarah Holton, M.D.” on the form).  Their second daughter, Frances, was born in October, 1887. William worked as a dispatcher on the railroad between stints as a telegraph operator and banker.  So when Holmes arrived, Dr. Holton would have been running the store with a baby, and perhaps another one on the way (depending on just when he arrived).

An 1896 alumnae book lists Elizabeth as “not in practice” by that time, and census records confirm this (her profession is generally listed as “none), though she’s still listed as a licensed physician in Illinois in directories going well into the 20th century. From other records we see her serving in such groups as the Englewood Woman’s Club and the South Side Parents’ School Club, of which she was the secretary. She may have gone back to school again; she appears as “Elizabeth Sanders Holton” in a list of 1893 graduates of Hahnehmann Medical College, which held its commencement exercises in the opera house in May of that year (a couple of years later, that same school would be denying that it bought skeletons from M.G. Chappel, who claimed to have sold them one made from a body that Holmes killed).

It’s possible that she gave up the drug store to Holmes in early 1887 around the time she became pregnant with Frances, giving up her career to go have a baby (it was the 1880s, after all), but Holmes certainly didn’t kill her.  She was still on 63rd street, about a block away from the old pharmacy and “castle,” in 1892, when a city voter list has her living at 800 63rd Street. That she was on the voter list at all is somewhat notable – under “remarks,” a section usually left blank, the registrar wrote in “woman.” Another record from as late as May, 1895 has her at the same address, so she was on 63rd longer than Holmes was. It’s probably worth noting that this means that Abbie presumably knew her neighbor, Pearl Conner, who lived in the castle until her 1891 disappearance. They were the same age and lived down the block from each other.

After 1896, Elizabeth continues to appear in directories and census lists, generally living at 6157 Honore with Frances and William (Abbie died young), for several years, until William’s death (due to a short illness, according to the Englewood Economoist) in 1910.

One part of the story is correct – she did move to California with Frances at some point between 1913 and 1920. She died there in 1933. Frances, who became a schoolteacher, lived until 1972. She was single and had no children of her own as of 1940, the last publicly-available census that lists her.

The exact nature of Holmes taking over the practice is still certainly a question mark here – my guess is that she decided to give it up early in 1887 when she became pregnant with her second child and sold it to Holmes (though him not paying her would be about par for the course) – he was getting his IL pharmacy license in Springfield in Fall, 1886, so the timeline works out perfectly.  That Holmes may have tried to sleep with her is absolutely not out of the question (and, frankly, when you get pregnant shortly after HH Holmes shows up, tongues are gonna wag), but there’s no indication that his relationship with her was at all inappropriate, and he certainly didn’t kill her.

How she never became involved in the Holmes story in the 1890s is a mystery to me – she was living right down the block the whole time. Police and reporters were talking to just about everyone who’d ever met him in the summer of 1895, and she still lived in the neighborhood, but I’ve never found an instance of reporters seeking her out.  It’s possible that police left her alone because she was in mourning – Abbie had died, aged 11, in May of 1895 after a brief bout with gastritis. Holmes had been safely locked up for some time by then, so there’s no reason to suspect him here, either.

Still, the fact that she attended the University of Michigan for awhile is a fascinating little piece of the puzzle. Holmes and Holton may well have had mutual acquaintances in Ann Arbor, and perhaps it was one of them who suggested that if Holmes was going to Chicago, he should look to Lizzie Sanders for a job, which would have lead him right to the intersection of 63rd and Wallace, across the street from the site where he’d build his famous castle.

Thanks to Cynthia at ChicagoGenealogy.com for finding birth and death certificates for Abbie Marie!

4 thoughts on “H.H. Holmes: The Truth About Dr. Holton”