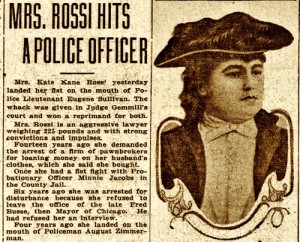 In the 1885 “trunk murder” case, three Italian men were charged with killing a man, stuffing his body in a trunk, and mailing him to Pittsburgh. One thing stands out in notes about their high-profile trial that diffrentiates it considerably from other such trials of the day: two of the men were represented in court by a black man, and the other was represented by a woman, Kate Kane.

And, as widely-known as the “trunk murder” case was in its time, it’s possible that lawyer Kate Kane was already more famous than her client. Sometimes said to be the only woman lawyer in Chicago at the time, a couple of years before the Trunk case she had made national news when she tired of a judge’s sexist comments and threw water in his face.   In the drawing at the left, she is being ejected from the Mayor’s office in 1908, after being refused admittance to see him. “No wonder the town is full of criminals and blackhands,” she shouted. “When a little poodle like you can stand around here and order respectable people out… I couldn’t vote myself, but I went out and rounded up 22,000 votes for the Mayor.”

Only the thirteenth woman to be admitted to the bar in Illinois, Kate Kane (later Kate Kane Rossi) practiced law in Chicago for nearly forty years, representing every sort of crime, she once said, except for treason and piracy, and representing every race and creed except “followers of Zorostoar and Mahomet.” She once ran for the job of First Ward Alderman, and tried to be made superintendent of the police at one point. She would have been considerably more qualified than many men who got the job in her era, when the gig was strictly political and often went to people with no background in a field related to law enforcement at all.

But what kept Kane in the news for the first half of her career were her occasional bursts of violence. When she took her daughter to work (which she did long before “take your daughter to work day” was a thing), someone stepped on the girl’s toes, and Kate, taking it for a deliberate assault, clobbered the guy. More than once she hit a guy over the head with a parasol, and when a court worker didn’t realize she was a lawyer and tried to bodily remove her from her seat, she beat him over the head with a shoe. More than once she ended up arrested for contempt of court.

To be sure, she received her share of sexist abuse, both from the bench and the press, who might not have thought twice about a male lawyer smacking someone around (but, then again, might have). Even papers who were trying to be complimentary to Kane were known to refer to her as a “girl lawyer.” In a move that might not happen today, a police officer was once fired for winking at her. But the press also frequently praised her for her eloquence and her capabilities as a lawyer.

Stories from her trials in the archives are endlessly fascinating. When prosecuting a father for neglecting his wife and baby, the baby died in the courtroom in the middle of the trial. She had one woman excused of vagrancy on the grounds that women were “not made for work” and thus could not be vagrants. When her husband pawned some of his clothes, she tried to sue the pawnbroker for taking stolen property (since she, not he, had paid for them).

Stories from her career could make a dynamite TV series – partly because the main character would be complicated and frankly flawed. Though her quick and sometimes violent temper is probably understandable, she was also recorded making racial comments during fights with black lawyers and officials that were uncalled-for and shocking even by 1890s standards, and would be instant career-enders today. We can hope that the reports were just “newspaper talk,” but a few of the nastier ones were quoted by multiple reporters in town.  The fact that someone is a pioneer doesn’t mean they aren’t also a product of their times.

Still, she did admirable work; later in her career she seems to have focused on defendingprostitutes and “white slaves,” whose oppression she campaigned hard against, even running for State’s Attorney as a member of the “Abolition of Female Slavery” party. Her ground-breaking career – she was admitted to practice in the Supreme Court in 1900 – deserves more attention than it’s gotten to date. Figuring out exactly what sort of person she was, and what her politics were, can be a bit tricky based on extant sources; far more of her character was probably revealed in a regular column she had commenting on people and events of the day in a newspaper called the West Side Weekly. However, that paper doesn’t seem to survive. Could a microfilm reel be out there someplace?

She remained in the profession until 1920, and died in 1928. I’ve also been unable to find many photographs of her;  usually more photos will exist of prominent people who lived until that late, but all I’ve come across so far are the one photo seen twice above and newspaper drawings of it. The local Hearst papers (few of which are currently easy to search) probably have more of them. Though not all of her views and actions would be considered admirable today, the story of Kate Kane Rossi deserved to be studied in more depth than it has been.