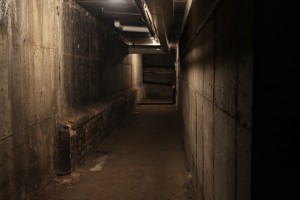 NOTE: this post has been replaced by a much bigger, more detailed one that I wrote after a trip into the basement of the post office with the History Channel in June, 2012. CLICK HERE for the new, updated one! (or just scroll down, as most of the info has been appended to here)

The murder castle of H.H. Holmes was torn down in 1938. There were rumors that it was haunted while it was still standing, and a few stories now circulate about the basement of the current building on the grounds.

The government bought it in order to put up a post office on the site. This one, to be specific:

Notice the fallout shelter sign on the door – apparently, nowadays people go to the basement to LIVE (at least in theory). t doesn’t occupy the EXACT same footprint – the left hand side of the building would have been in the middle of Wallace Street in the Murder Castle’s time – but it does occupy a portion of the grounds. The drugstore Holmes ran would have been on the right hand side, possibly stretching into the empty space besides the station.  Dr. Holden’s pharmacy, the other drug store Holmes took over, was across the street (in what is now an Aldi parking lot). As far as we know, not a bit of structure from either building remains, though I suspect we might find some foundation if we dug the place out. I don’t think they’ll be letting us do THAT anytime soon, though (update: the basement below IS said to be partly original – CLICK HERE for “The Murder Castle- Today! Part 2

Here’s a diagram showing what overlap there was, based on overlaying three versions of the Sanborn fire insurance maps. The “Castle” is in blue:

As you can see, there’s SOME overlap, but not a lot. The mysterious gas tank said to be used for cremations was well away from the post office itself. But I always say that if someone can come back from the dead, surely they can walk down a hall, too, right?

I DID just have a woman on the tour who lived near the castle when she was young – when it was still standing. She said remembered feeling spooked by the place – enough so that she’d cross the street so as not to walk by the site – but didn’t know why until decades later.

(due to the popularity of this page, I’ve appended the later post from June 2012 right here): 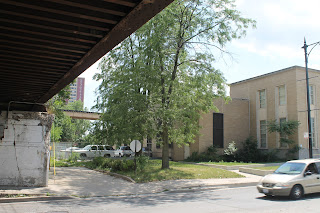 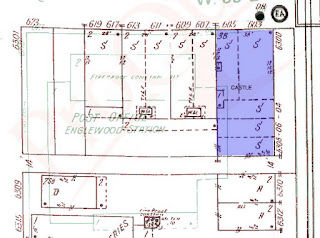 By lining up the three versions of the fire insurance maps (two from when the castle was there, and one from the post office), we can see that it did overlap with the portion of the post office that juts out on the left – between a third of it to all of it, depending on how you measure things (lining up these hand-drawn maps is not an exact science, though lining up the railroad tracks helps a lot).  Here’s an overlay of two of them, with the castle shaded in. You can see just a bit of overlap:
And here’s my best attempt at superimposing the castle where it would have done. 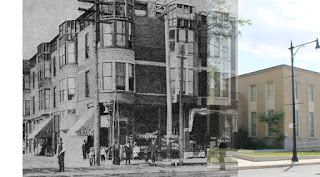 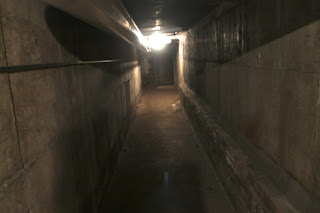 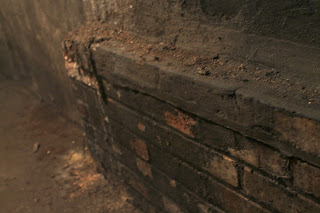 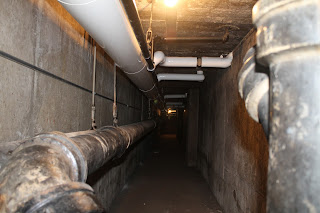 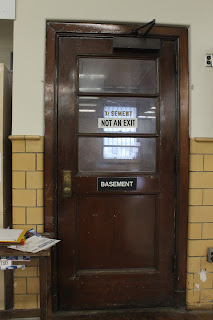 I took a number of photos and had an audio recorder running in the basement. I can’t reveal what I found just yet (there are a few toes I don’t want to step on, and I’m still vetting it). Also, I always like to point out that there’s no such thing as GOOD ghost evidence, only COOL ghost evidence.  But I got a couple of the coolest things I’ve ever found down in the basement – a series of photos that I’d rate as a B+, and an audio recording that is a solid A.  I recorded several minutes of silent audio, both in the tunnel and in the grassy knoll, for use as a play-along podcast where listeners can listen for ghosts themselves – it’ll come out in time. But there’s one bit from the tunnel that I don’t’ mind saying is knocking my socks off, and I’m a snot-nosed skeptic about all this stuff. This is, as far as I know, the first cool ghost evidence ever collected at the castle site:

Some people call spooky audio recordings like this “E.V.P. (electronic voice phenomenon).” On TV, the “EVP” guys are usually the ones saying “are there any spirits here who have a message for me?” I keep hoping there’ll one day be an episode where a ghost says “Yes! Your wife said she wanted you to pick up milk on the way home!”

Most of the time, when someone plays me an “EVP” file, I have to use a lot of imagination to hear what they’re talking about. But now and then we do get something I can’t help but think is pretty cool – like this thing from the basement.

So I don’t make grand claims stating that this is ghostly girl who has come back to life or never crossed over or what have you, especially given that it sounds to me as though she’s saying “Sorry Beefalow,” which doesn’t mean anything. It sounds like the worst Chef Boyardee product ever to me. One suggestion is that the voice is trying to say “buried deep below.”  But I’ve no idea what that voice could REALLY be, and any claims I made would just be me talking out of my ass.     Here’s a recipe for sorry beefalow!

I’m even skeptical about about the castle itself – I would only say with confidence that three people were killed there. Six to eight tops, including a couple of who died off-site after being given poison there.   Holmes probably only burned a couple of bodies in the castle before deciding that destroying a body in a crowded building was too much trouble and shipping them off-site to one of his “glass bending” facilities (he had a weird pre-occupation with bending glass; people eventually guessed that he was probably really using the massive furnaces he built for that purpose to get rid of bodies. He sure as hell never used them to bend any glass).

I tend to think of Holmes as a swindler, first and foremost, who happened to kill people now and then, not as a regular serial killer. His suspected number of victims stood at 10-12 in his lifetime, and didn’t start inflating until about the 1940s. Nowadays it seems to go up by a hundred or so every Halloween. But as far as hauntings go, the story still checks out – a few murders are more than enough, and as long as ANY of the current building overlaps, I think it’s fair game to look for ghosts there. If you can come back from the dead, you ought to be able to make it down the hall.

For more photos and videos (and much of this same info), see our Murder Castle Audio/Video page.

So, I’ll have more info for you guys eventually. In the mean time, consider one of Chicago Unbelievable’s line of Holmes-lore ebooks!

Our “Murder Castle of HH Holmes” ebook has now been expanded to nearly triple its original size – it’s now a full-length compendium of diagrams, drawings, eyewitness accounts, and more primary sources, all with detailed commentary – everything down to the combination to the soundproof vault, including a long-lost interview with Holmes himself.

The Confession of HH Homes
A detailed analysis of his 1896 confession(s) for Kindle or nook. Did he really kill 27 people, or were more than half of them lies? The complete text of the confession from the Philadelphia Inquirer, with comparisons to a version published in other papers simultaneously (which contained some major differences) and the mysterious version published the day before in another paper, including the famous “I was born with the devil in me” section. Fully illustrated with newly-discovered evidence. 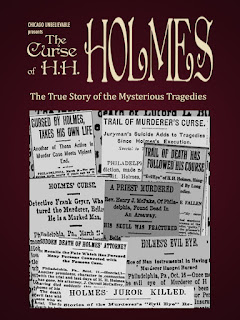 The Curse of H.H. Holmes
Did the people who participated in the trial that sent Holmes to the gallows die mysteriously? The Holmes “evil eye” was not just a story invented by pulp writers years later; papers were speaking of it even before Holmes died, and continued to retell the story for years. Find out all about it in this mini ebook! Amazon (kindle) BN (Nook)
And for more on Punk Rock James, there’s a whole interview with him in The Smart Aleck’s Guide to Grave Robbing, which includes everything you need to launch YOUR career as a 19th century resurrection man – the Smart Aleck way! We here at Chicago Unbelievable strongly suspect that Holmes chose to attend the University of Michigan because of its reputation as a hub for body snatching.
Don’t have one of those?
Read them on a free Kindle app
for your pc, mac, iPad or phone.
Or a free NOOK app
for pc, mac, iPad, or phone