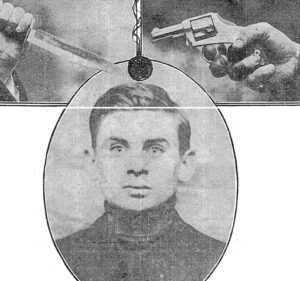 In early March, 1908, a young man in his late teens named Lazarus Averbuch was shot to death in the entryway of police captain George M. Shippy’s north side home.

Exactly what happened is a matter of some dispute. We know that Averbuch, who had emigrated from Russia a year before, was admitted by the maid and tried to hand the chief an envelope later found to contain a blank sheet of paper. The chief immediately suspected trouble (the visitor looked like the kind of guy who might be an anarchist), and apparently grabbed Averbuch and attempted to detain him so that his wife could search his pockets.

A scuffle ensued, and it ended with several members of the household wounded, and Averbuch himself lying dead on the floor.  Newspapers breathlessly announced that Shippy had survived an attempted assassination by an anarchist. Averbuch, they said, had intended to kill Shippy because Shippy had shut down a planned parade of unemployed men.

Immediately, plans were put in motion to make laws banning “incendiary” speeches and writings, and a city-wide crackdown on anarchists and radicals took place. The Jewish community, which the public tended to associate with radicalism in those days,  seems to have taken the worst of it; Jewish leaders took the press insisting that Judaism taught respect for the laws of nations and that not all Jews were violent radicals or anarchists.

In the early days of the scandal, though, most of these leaders seem to have taken Shippy’s story that the killing was done in self defense at face value. But as the days went by, doubts emerged. Police attempted to link Averbuch to anarchy by any means necessary – detaining his friends, ransacking printing houses and the homes of known anarchists – and came up largely empty.  Whether or not Averbuch was even armed came into dispute – early reports said he’d been carrying a pistol and dagger, but there were reasons to doubt it.

A second theory as to what had happened that night began to gain currency: that Averbuch had gone to the chief’s house asking for some sort of assistance, but Shippy had seen a foreign-looking man, panicked, and attacked him, wounding some family members in the process with wild shooting.  Averbuch’s sister, Olga, didn’t know what Lazarus was doing at the chief’s door that night, but though he might have been trying to get a letter saying he was of good character, or a pass to leave the city (which would have been required for Jews in his native Russia). Averbuch was eventually disinterred from the cemetery at Dunning for a second autopsy, and the result shed even more doubt on Shippy’s version of events.

That Averbuch was innocent was not a unanimous opinion even among progressives, though; attorney Clarence Darrow, who could generally be counted on to support underdogs, said, “I went into it far enough to satisfy anyone with any sense that Averbuch intended to kill the chief and went to his house for that purpose. I told those who invited me to take up the case that there was nothing to it and that the chief did not deserve criticism.”

Personally, after looking into the case, I couldn’t really form an opinion as to whether Averbuch was planning to kill Shippy that night or not. Historians today generally seem to think he was not, but I couldn’t convince myself one way or the other. Darrow’s opinion goes a long way with me, and Averbuch had been in the country long enough to know that he wouldn’t need a letter from the authorities to leave town. He was savvy enough to get Shippy’s home address, after all.

Either way, though, Shippy seems to have pounced on the guy strictly because he looked foreign. If Averbuch was planning to kill him, it was a lucky guess on Shippy’s part, and one that was probably based on prejudice, not on evidence.

It’s certainly clear that the authorities worked harder to make sure Shippy would not be charged than they did to get to the truth of the matter. They were not above dirty tricks to keep the coroner’s jury at the inquest from finding reasons to doubt; at least one witness who wanted to testify as to Averbuch’s character on the day of the inquest was arrested and locked away until the inquest was over.  Jane Addams of Hull House wrote at length about the questionable methods, shoddy investigations, and inconsistencies in the case.   There was a widespread feeling that the whole affair had been flawed, and that police and politicians were simply using Averbuch as an excuse to crack down on immigrants, Jews, and other outsiders.

Reading through old newspaper accounts of the investigation do very, very little to dissuade modern readers of the notion that Averbuch could simply have been a victim of hysterical prejudice. Many articles drip with anti-immigrant sentiment and anti-semitism. The case that was told to jurors is full of racially-charged language;  it’s awfully difficult to read about the case today and not notice parallels with similar modern cases.

Even putting aside the arguments as to whether Shippy’s actions were justified, there are a lot of mysteries in the case. His exact burial plot is no longer known. His actual first name is in dispute. What became of his sister is not known (she went back to Europe and is presumed to have died in the Holocaust). And if Averbuch didn’t go to Shippy’s house intending to kill him, there’s certainly a mystery as to why he was there.  And so on.

The story has been told elsewhere in more detail than I can tell it here; I recommend The Lost Boy, a 2009 story in Chicago magazine.  There’s also Jane Addams’ article about the case and the effect it had on the Jewish community’s general distrust of local police (pdf link), which does a fine job of outlining the inconsistencies in the case, and the questionable actions of the police in the aftermath, and how they only made things worse in the end.