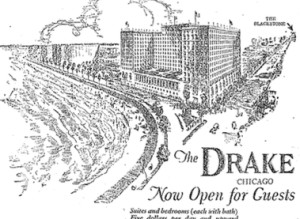 Let me just share a bit from the Trib’s report on a burglary and murder from the Drake Hotel in 1925, when a group of drunken men in Lone Ranger-style masks burst into the place with guns blazing: “(the bandit) flourished his guns and expressed himself in some choice profanity calculated to impress his victims with the desirability of obedience.” I love that.

The Drake, like any old hotel, has some gruesome stories behind it. There was the story of “The Woman in Black” who murdered Adele Born Williams there in 1944 – a bizarre case that was never solved. Leopold and Loeb were interrogated there. Their victim’s father later died there. A baroness was found dead in a bathtub there in 1962.

But the main ghost story about it, the one that everyone in the building seems to know, concerns a “woman in red” who mainly haunts the tenth floor. According to legend, it’s the ghost of a woman who caught her husband cheating at a New Year’s party in 1920, just after the hotel first opened, and threw herself from a tenth floor window.
If this suicide truly happened, it doesn’t seem to have made the papers – I’ve never seen anything to back it up. There was a former model who jumped from a tenth floor window, but she was an older woman (the kind papers back then described as “once beautiful”), and it was decades after the hotel opened.

But there’s a chance that such a suicide WOULDN’T have been reported in 1920; the hotel was presenting itself as the finest in the world, and probably would have gone to great lengths to keep such a suicide out of the press. Had the woman landed on the sidewalk, there probably would have been no way to stop the story from leaking. However, if she landed on the roof of the setback, they COULD have possibly had the body removed without any reporters finding out. But some mayhem from the New Year’s party did make the papers – one woman lost (or was robbed of) a $5000 necklace during the party. A week before another woman had lost a $1000 pearl and emerald ring in the washroom.

My team’s recent investigations at the hotel have not yet turned up anyone who knew anyone who had actually seen the woman in red, so where the story came from seems to be, like so many ghost stories, anyone’s guess at this point. There are many other places around the hotel where the staff is known to get spooked, but there aren’t as many specific ghost stories there as I would frankly expect from such a historic hotel.