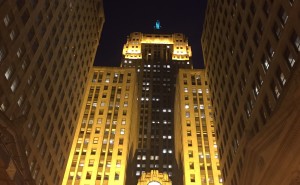 When built in 1930, the 600 foot Board of Trade building that anchors LaSalle Street was the tallest building in Chicago – an honor it held for decades. Though now dwarfed by the supertall skyscrapers around it, the art deco building is still stunning to behold, and pointed out by every architecture tour. But if you take a few, you might notice something strange: no two tour guides seem to agree as to why the statue of Ceres, the Roman goddess of agriculture who stands atop the building, doesn’t have a face. Some say that it’s just an art deco thing, and others say that the sculptor figured that no other, taller building would ever be built nearby, so no one would be able to see the face, anyway. Some say outright that they’ve heard a lot of theories, but nothing totally convincing.

The truth, according to sculptor John Storrs’s own statement in 1930, lies somewhere in between – though the style did keep it in line with the art deco style of the building itself, he also figured that details were less important than outlines, given how far away most people would be from the statue.

Storrs, a Chicagoan himself who spent much of his time in Paris, explained his design and ideas in great detail to the Tribune in their May 4, 1930 issue, about month before the statue was to be put in place:

“When I was given the order to execute a sculptural piece to cap the tall Board of Trade building, I had two major points to consider. First, I wanted my work to be in architectural harmony with the building on which it was to stand. Second, I wanted it to be symbolical of the business which the organization the structure was to house.

“The first point I have accomplished through treating the subject in an extremely modern manner. The vertical lines of the building itself are retained in the lines of the statue. Because of the great height at which it will stand the matter of detail did not have to be taken into consideration. The outline of a woman’s figure is suggested rather than rendered exactly.

“As to the second point, I borrowed a thought from the classical period. Ceres well symbolizes the activity of the Board of Trade, so I took this goddess sister of Jupiter for my subject. However, while the thought is classical, the treatment is thoroughly modern.

“From the street the statue will appear to pedestrians mostly in silhouette. The hands holding the sheaf of wheat and the sample bag extend from the body abruptly instead of being attached to arms. The face, too, is suggested, inasmuch as there are no regular features.”

He also noted that he considered the top of the Board of Trade to be “one of the most commanding positions for a statue to be found in America.”

Chicagoans were very enthusiastic about the design when it was built. However, there was another reason why ignoring details was probably wise – within just a few weeks of being placed, the statue was completely blackened by soot from smokestacks, and didn’t get a bath for 12 years!