Update 2013: the number of axe murders said to take place in this bar seems to go up every Halloween. Only one can actually be verified, though.

If you watched Ghost Lab tonight, you caught them talking about the two axe murders and one pop bottle bludgeoning that took place in The Liar’s Club, a frequent tour stop for us. An interesting thing in this episode was the woman talking about people picking up on residual emotions left over from violent deaths. I have actually seen this in action at the club – in the upstairs room, where the murders took place, I once had a tour patron become very disturbed – she felt almost as though she was being “possessed” by something very unpleasant, and had to leave the room. I can’t say what was really going on in her head, but I HAVE gotten good at telling when someone is putting me on, and she wasn’t doing that. However, that has only happened once, and is, in fact, the ONLY ghosty experience I’ve ever had at the location. But it did happen RIGHT in the spot the Ghost Lab team was testing.

As usual, the issue I have with these guys is that they seem to believe everything they hear, and seem awfully quick to claim that any weird picture or equipment reading they come up with is definitely a ghost. Perhaps it’s just the way the show is edited. I’m glad they at least came clean on the banging noise that turned out to be a manhole being driven over tonight, and I’m glad to see them using gear that I DON’T have – I’ve never had the chance to use a biocam.

I’m also not entirely sure why they put up obviously photoshopped headlines instead of the real newspaper clippings – probably just a rights issue. In any case, for your perusal, here are a couple of actual articles about the murders in the Liar’s Club: the pop bottle bludgeoning in 1962 and the axe murder from 1986. 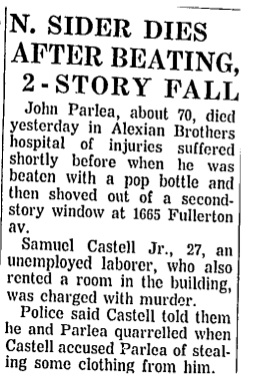 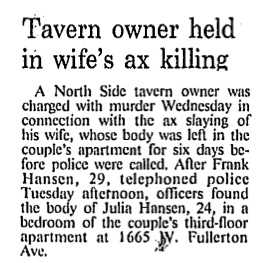 I don’t have any documents on the 1950s ax murder (bizarrely, it didn’t make the Tribune, if in fact it happened at all) – HOWEVER, there are more stories about the history of the place. A guy who lived in the building was shot – and nearly killed – in a fight outside of a nearby bar in 1955, and there was actually very nearly ANOTHER murder in the upstairs room in just the last year, when a guy narrowly survived after having his throat cut in a bar fight.

The article notes that the body from the 1986 murder was found on the third floor, not the second, which is always said to be where all of the murders took place. It is also probably worth noting that the pop bottle guy appears to have died in the hospital, not outside of the club, though I believe other sources say he was dead on arrival.

It looks like next week’s episode will be the investigation at a place I’ve investigated heavily – Old Town Tatu.

5 thoughts on “The Liar’s Club”