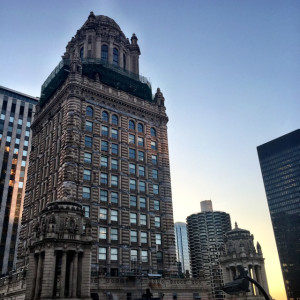 In my gig as a tour director for student groups, I take a lot of other peoples’ boat tours, bus tours, and walking tours. One thing I’m always curious to see is how they’ll tell the story of Al Capone throwing parties in the dome of the Jeweler’s Building at Wabash and Wacker. According to most tales, the dome was once home to the Stratosphere Club, a speakeasy that was either owned or frequented by Al Capone, depending on who’s telling the story. Some are quick to point out that Capone’s connection is just a rumor, others really double-down on saying it was true.

Capone stories almost always fall into the “Not true, but it should be” category of Chicago lore – and that of other cities, as well. I can’t even tell you how many tourists have assumed that I know all about their small town, because it was where Al Capone had his summer home/hideout/warehouse. It seems that there’s hardly a town in the midwest where kids aren’t told that Al Capone used to hang out in town a lot.

The other story of the Jeweler’s Building is that it once housed an elevator for cars, so that jewelry dealers who worked in the building would never have to step out of their car with their valuable stock and into Roaring 20s Chicago, even for a second. Instead, they could drive right into the building and be lifted right up to the floor where their office or showroom was.

Digging into the newspaper archives, it’s quite clear that the elevator story is true: much was made of the car elevator when the place was built; the twenty-three story garage took up about 25% of the total building’s space at the time. A 1924 article in the Tribune said that it would be the tallest garage in the world.  It didn’t totally protect the builders – shortly after it opened (and was quickly renamed The Pure Oil Building), there was a big jewelry robbery there in 1926; three young bandits burst into a gem shop with pistols and made off with $25,000 in jewels.

And the Stratosphere Club in the dome was certainly a real place – but it wasn’t a speakeasy, and there’s no way that Al Capone was ever there.

When the 40-story Jeweler’s Building was first built in the 1920s, the dome seems to have sat empty for some time. In 1932 it was reported in the Tribune that a hawk had taken up residence in the dome and was preying on migratory birds in the loop.  A reference or two in the archives seems to indicate that it was used for storage.

The creation of the Stratosphere Club was announced in the press in the Jan 10, 1937 Tribune article entitled “City’s Highest Restaurant Being Built.” Owned by Paul Streeter and taking its name from a club that had been in Rockefeller Center in New York, the club was set to open in March, and would cover four floors – a kitchen on the 37th, a regular restaurant on the 38th and 39th, and a cocktail lounge on the 40th, with decorations to make it look as though one was in a hot air balloon. By March of 1937, when it opened, Capone had been in Alcatraz for some time, and liquor was perfectly legal again.

The club was a hit, by most accounts, but my 1954 the space had been converted into a showroom for a commercial artist (and still using the old circular bar at the time); it’s now the showroom of architect Helmut Jahn.

None of the necessarily proves that there wasn’t a speakeasy there in the 1920s, after it was first built, but people were generally pretty open in reminiscing about their favorite speakies in later days, and I’ve never found a reference to indicate that there was one in the dome. It’s one of those Chicago stories that isn’t quite true – but it should be.