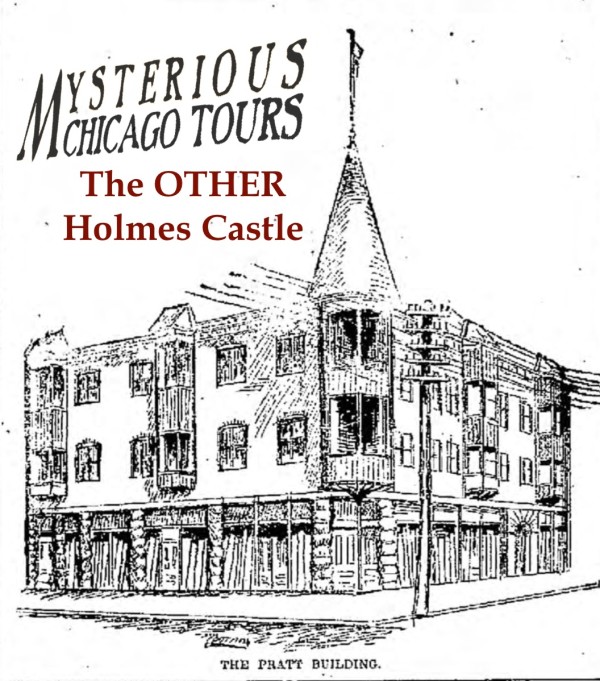 Been a while since I had a new Holmes post up! But I spent the last year researching him in depth for my massive new book on him, and with a couple of Holmes bus tours coming, I thought today would be a good day to share a bit about the lesser-known OTHER Holmes Castle in Fort Worth, Texas – just a bit of the previously unexamined data about him I’ve been poring over for the last several months.

It’s mentioned in a couple of books about H.H. Holmes that after leaving Chicago in late 1893, he attempted to build another “castle” in Fort Worth, but found that the authorities there were a bit nosier than the ones in Chicago had been, and never finished it.

Like nearly everything about Holmes, this isn’t exactly right. For one thing, the authorities in Chicago knew quite a bit about the “Castle” there – it had been the subject of countless lawsuits that generated boxes and boxes of paperwork, as various investors and suppliers sued Holmes and the co-owners. In August, 1893, Holmes had the flimsy third floor torched and tried to cash in on the four insurance policies he’d taken out on it. The companies smelled a rat at once and began investigating the place from top to bottom (generating a lot more paperwork in the process). Sure that he’d be arrested arson and fraud if he stuck around, Holmes left Chicago in December 1893 or January 1894, married his latest girlfriend in Denver, then met with Ben Pitezel in Fort Worth, where he had deeds to some property at Second and Rusk that he claimed to have bought from Minnie Williams. In reality, he’d probably murdered her. He’d murder Pitezel later that year.

Throughout winter and spring, 1894, Holmes and Pitezel (under names Pratt and Lyman) supervised construction new building in Fort Worth, which was, in fact, actually completed, though never occupied or used. Though about twice the square footage, being on a wider lot, it was almost exactly the same design as the Chicago castle on the outside.

When Holmes became national news the next year, more than one Texas paper sent reporters out to investigate this second “castle,” and I ran across their accounts while researching my new HH Holmes book (which will be out through Skyhorse in April, 2017). One even including a drawing, which not only shows us a very good view of the place, but might actually be a good representation of what the Chicago castle really looked like – we don’t honestly know quite how it appeared in Holmes’ day. It was originally built as a two story structure in 1887, with the very flimsy third floor (the “hotel” portion) added in 1892-3. Though there’s one photo of the place from 1895, it was only after the fire had wrecked the third floor and been replaced by what one paper called an “unsightly temporary roof.”  The view of the Ft. Worth building above, with the pointed turret, might be closer to what the original castle looked like during Holmes’ time there.

Stories did swirl about the place, and it does seem as though Holmes planned the place to have even more secret rooms than the original cast.  In 1895, after sitting empty a year, the place did give people the creeps, even for practical reasons: papers took to calling it “The Rusk Street Fire Trap.”

A Galveston Daily News reporter sent to investigate said “The grim, half-completed building nearby, (and) the dark alley give the place an uninviting appearance. The weeds grow above the spot and the smell of the surroundings is suggestive enough.” He further noted that in the middle ages, the place would have been called “The Castle of Many Doors.” Rumor had it that there was a chute leading right to a sewer, which would have been a great way to dispose of a body (though a careful investigation pretty much debunked the story).

The description of the castle written for the upcoming book, based on the news reports:

The second floor was sort of a nest of rooms – an outer tier sat just inside the windows with doors that made it so one could go almost all the way around the perimeter without ever stepping into the hall. An inner tier contained rooms that didn’t connect to each other at all, and were lit only by a “queerly designed skylight,” which was in V shape from the roof down the side of the walls. The walls of the closets were uneven, and the walls were filled with all sorts of gas pipes. It was an easy building in which to get lost. A “closet within a closet” on the third floor suggests that room had been set aside for a new walk-in vault. An artesian well sat in the back. 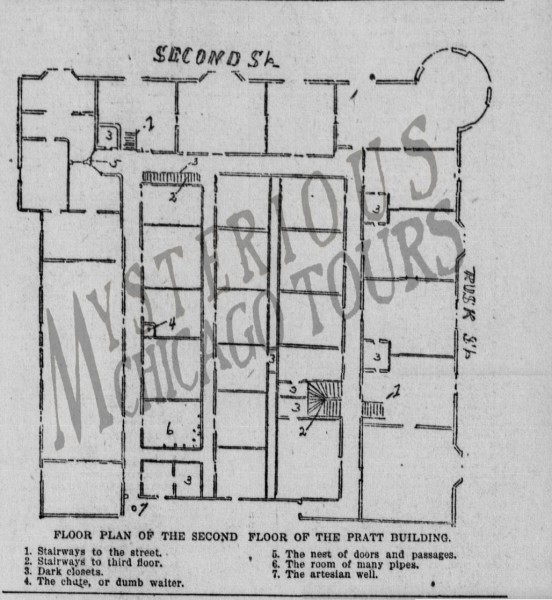 From accounts of his doings in Texas, it seems that the Ft. Worth castle was built with much the same goal as the original: as a vehicle for swindling. Holmes used the construction to buy materials on credit that he never intended to pay back, and got involved in some horse swindling while he was at it – creditors started breathing down his neck quickly, and Holmes got out of town before doing anything with the building. No one is known to have been murdered there, and it probably wasn’t planned as a place to kill people any more than the Chicago one was (it was a vehicle for swindling first and foremost; the torture chamber stories were mostly, in the words of Holmes’ lawyer, “*#*%*ing rot.”  But while Holmes’ Chicago building was a long-term project, in Texas the idea was just to improve the land with the building, sell it for a profit, run as many swindles in the process as he could, and then move on. But it’s easy to imagine that the strange “nesting” construction of the place indicates that Holmes may have had something more sinister in mind.  The “artesian well” suggests that Holmes may have been plotting to relaunch his old scheme of selling “mineral water” from a few years before.

Though gone today, the Ft. Worth Castle survived about as long as the original – up to the 1930s or so (I couldn’t find exact data on when it was torn down). After filtering through several legal disputes, the place became a hotel and apartment building for a while, caught fire pretty regularly, and was the site of at least one grisly death, when a man died of a morphine overdose in one of the rooms in 1898. Papers in Ft. Worth continued to refer to it as the “Holmes Castle” for decades, and by the 1920s reporters and locals seem to have forgotten that it wasn’t the same “Holmes Castle” that had attracted so much attention back in 1895! Recaps of it then spoke of skeletons being found in the basement.

Much, much more on the construction of the castles will be detailed in my H.H. Holmes book (of which the subtitle is still TBA) coming in April, 2017!   In the meantime, if you want to hear a LOT more about Holmes, I’ll be running two bus tours about him on the afternoons of Oct 29 and Oct 30, 2016, through Atlas Obscura, and Holmes comes up a bit on the Rosehill Cemetery tours I’ll be running throughout October!

Some major sources for this article include:

One thought on “HH Holmes’ OTHER Murder Castle in Fort Worth: Diagrams and More”