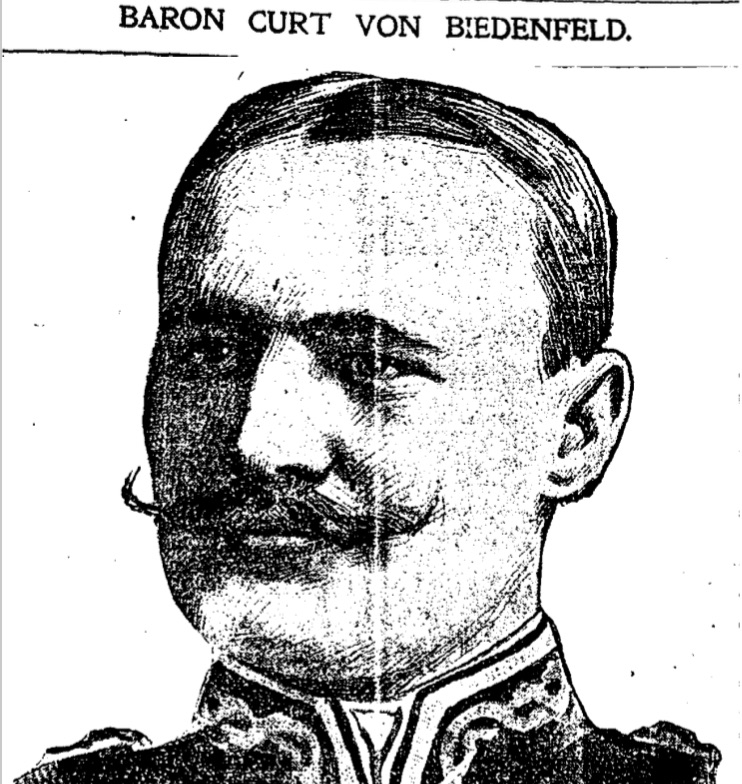 While doing research for the new Architecture of Mysterious Chicago tour, I ran into some fascinating data about Baron Cut von Biedenfeld, one of the late 19th century Chicago’s more colorful characters, who is all but forgotten today.  Look him up online, and you’ll mostly find references to his father writing letters back and forth with composer Richard Wagner.

Born in Germany in the early 1860s, Baron von Biedenfeld managed to blow through all his money as a young man, and moved to the States nearly penniless, earning his first money by shoveling snow in New York during the Great Blizzard of 1888. Thereafter, he moved to Chicago, where he married his way back into high society, and became known as a man about town, occasionally making the society columns in the papers and living in a mansion at 20th and Indiana, near the famous Prairie Avenue district. He occasionally made the police blotter as well; an 1892 account in the Inter-Ocean speaks of the Baron (then still known as Count von Biedenfeld) getting into a scuffle at a bar on 22nd and Michigan – when a man insisted that the Count pay for the drinks, things got rough, and ended with Von Biedenfeld hitting the man in the head with his cane six times.

This was all a precursor to a day six years later, when the baron was drinking at Redpath’s Saloon on Jackson, and was heard to remark “All Turks are cowards.” Police Officer Charles McDonald, who knew the Baron pretty well and thought he was using “Turk” as a slang term for an Irishman, said “I’m a Turk, and I’m not a coward.”  Baron von Biedenfeld drew a piston and shot McDonald to death.

In court, a number of witnesses from red light districts affirmed that McDonald had a reputation as a rough character, and lawyers claimed that he’d been out to get the Baron for three years. The Baron himself insisted that the “unfortunate” shooting was self defense on his part, as McDonald was reaching for his own gun. The jury agreed, and he was acquitted. He gathered his things from the county jail (pausing to joke with prisoners who asked him to come back and visit), then moved right back to Germany.

A year later, he published a book about America. Only excerpts in English seem to be available, but some of them are rather interesting: “Immigrants who do not possess a certain sum of money, or who have no relatives in the States,” he wrote, “are promptly sent back…. Americans only have use for a man who has something of which they can rob him.” He went on to say “There is one weakness peculiar to the entire American people: the respect for success without regard for the means by which it was achieved.”

Redpath’s Saloon stood where the Steger Building is now, adjacent to the Pickwick Place, the courtyard where Architecture of Mysterious Chicago tours begin.