All over Chicago, people will point to fur dealers, suit shops, and any number of places, saying that Al Capone was once a regular customer. Sometimes it seems that there’s hardly a third or fourth generation Chicagoan around who doesn’t have a story about their grandfather selling Al Capone his suits.

At his October 1931 income tax trial, though, it became clear that Capone’s shopping habits were much more mundane – most of his furnishings and clothing came from Marshall Field’s. 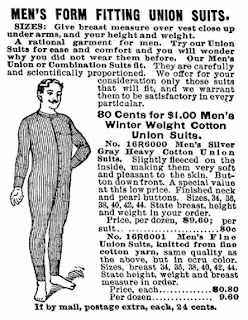 E.M. Arl of the custom shirt department took the stand to say that Capone would purchase a dozen or so custom-made shirts at a time, priced at $18-30 each ( a hell of a lot for a shirt at the time; the jurors were noted to gasp when told the price). He was also shown to have bought 18 collars at two bucks each, 24 monograms for just under a buck, and more. Earl A. Corbin, from the custom tailor department, mentioned selling Capone 28 ties at five bucks each, as well as lots of neckwear and handkerchiefs. A man from the suit department showed that Capone often had fittings both in the store and in his suite at the Metropole hotel (where he lived before taking up his more-famous residence at the Lexington in 1928), and bought his suits with cash. Most cost $135 each and were bought in lots of half a dozen.

Mr. J. Oles, assistant buyer for the men’s underwear department (yes, there was a guy whose job was to be asssistant buyer at the men’s underwear department) testified that Capone had bought three “union suits” (a style of one-piece long underwear) in 1927 for $12 each, as well as nine undershirts and nine shorts for five dollars each – an underwear purchase totalling over $100 in 1927 money (about three grand today). Two more underwear salesmen came forth with similar stories, and Capone swas seen to grin sheepishly when J. Pankan, a salesman, testified that Capone had purchased four $12 suits of “hand glove silk” underwear in 1928.

“What is hand glove silk?” asked the attorney.

“The materials of which ladies gloves are made,” said the salesman.

The Marshall Field is now a Macy’s, but still bears the Marshall Field’s plaque on the outside, and doesn’t seem a whole lot different on the inside now to me than it ever was. Then again, I wouldn’t really know, as I’m not the kind of guy who goes around spending that kind of scratch on underwear. Still, this particular revelation does make me want to head out there next time I need a new pair.