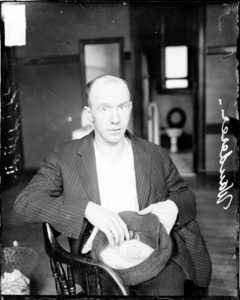 (expanded and updated from an older post after watching the first episode of  Fargo. I don’t think it’s a spoiler to say it reminded me a little of this guy’s story)

One day in 1920, Carl Wanderer came up to a drifter on Madison Street and told him he needed a favor. He was in the doghouse with his wife, who was about to have a baby and didn’t think he was enough of a man to be a father. Wanderer had hatched a plan.

“If you come up and pretend to mug us,” he said, “so I can punch you in the face and look like a hero in front of her, I’ll give you ten bucks.”

The drifter agreed, and Wanderer loaned him a pistol to make it all look more authentic. The next day, as he and his wife walked home from the movies, the drifter jumped from the bushes, held out the gun, and waited for Carl to punch him.

Instead, Carl Wanderer shot the drifter to death.

Then he turned and shot his wife to death, as well.

Exactly what was on Carl’s mind depended on who was telling the story later. Some said he wanted to get back into the army. Others say he was in love with an army buddy. Others still say he wanted to marry a 16 year old named Julia with whom he’d been having an affair. In any case, he’d made plans to kill his wife and blame it all on the drifter.

For a couple of days the papers thought he was a tragic hero who’d lost his wife while trying to save her life, but I don’t think the cops ever really believed him. They thought right away that it was odd that he and the drifter had the same kind of gun, and Wanderer’s response, “Oh, they were both my guns. But he took one from me. I don’t know what I was thinking when I said he had a gun!” didn’t make them put any more weight into his story. Why would the guy have taken two guns to the movies? How many people did he expect to have to shoot?

He was soon arrested, and the trial went on for a while. The defense tried to use plays he’d made in poker games to prove he was insane at one point. He was initially sentenced to life in prison for the murder of his wife, but outcry from the press calling to give him the gallows was so strong that he was rushed back into court to stand trial for the death of the drifter. The drifter was never positively identified (several identities for him have been put forth over the years), and the defense tried to claim that since the man hadn’t been identified, he didn’t legally exist and couldn’t possibly be murdered. But it didn’t hold. Carl was eventually sentenced to hang.

And so, in 1921, Carl Wanderer stood on the gallows near Dearborn and Illinois, ready to hang for the murder of his wife and a “ragged stranger.” As he stood there, reporters asked if he had any last words.

And so he did – he sang “Old Pal,” a song popular enough in 1920 that TWO movies would be based on it that decade. It was a real crowd pleaser – one reporter noted that “he should’ve been a song plugger,” though another said that he should have been hanged just for his voice.

“Old Pal” is one depressing song – as parlor songs were wont to be. Some say it was a love song to his wife, but that was probably just reporters selling the drama. Here are the lyrics: 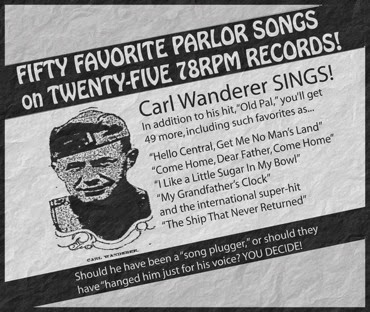 Old pal, old gal,
The nights are long and drear;
Old pal old gal,
Each day seems like a year.
No one left to meet me,
After all I’ve toiled;
No one here to greet me,
It’s an empty world.

Some say that they’ve heard the ghost of Wanderer singing this song in the space where the gallows stood – I’m almost inclined to believe them just because I don’t know how else they’d know how the song goes!

Scaring up a good recording of it isn’t easy nowadays. Singing the song to tour passengers is a good way to torture them today, but as a song, it’s a heck of a lot better than the song another Chicagoan, Charles Guiteau, sang on the gallows. Guiteau, the forgotten assassin of a forgotten president, sang a song called “I’m a-Goin’ to the Lordy” that he had written all by himself. It was even worse than it sounds.

For more on the courthouse/gallows in Chicago, see the new e-edition of the gallows book: