The 10 year strike at the Congress Hotel is over.

FINALLY! I was always upfront with the UFCW on what I was doing there – I never told people to stay there. I took people in, but it was to talk about the history, look at their stuff, and use their bathroom.  I’ve always felt that promoting the fantastic history of the hotel was important if management was ever to decide that it was worth saving the place at all.

But I still felt bad going past the strikers, and there’s no getting around the fact that people probably WERE staying there after reading some of my writings about the place or going on one of my tours of the old ballrooms.

This is good news for ghostlore fans – I sometimes say that if that place ain’t haunted, NO place is. Built to accomodate World’s Fair visitors in 1893 (though stories that HH Holmes was ever there are totally unsubstantiated),  dozens of people have died in the hotel, including the sloganeer who coined the phrase “safety first” (it would’ve been funny if he fell down the stairs, but it was a heart attack). The list of murders and suicides there is a long one. In the early days of prohibition, members of several different gangs lived there. Tony Genna lived in a luxurious suite.  Theodore Roosevelt announced he was leaving the Republican Party there in 1912.

There’s a long section on it in my upcoming GHOSTS OF CHICAGO book. Really, stories of that place could be a book unto themselves. Some of our venerable posts on the place:

The Hand of Drywall Dave – Update!

Florentine “Shadow Ghost” analysis!  (possibly the best picture ever taken on one of my tours – I like to imagine tat this is me with Teddy Roosevelt) 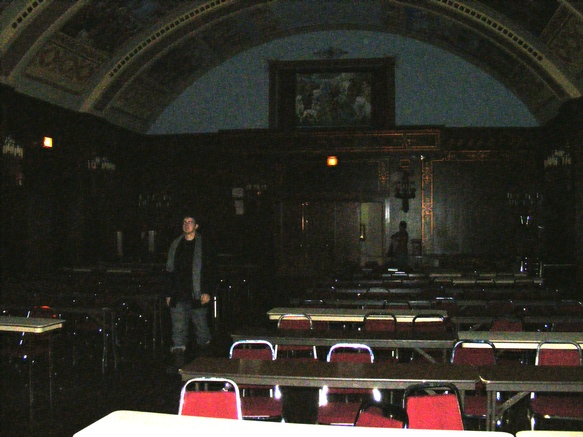 See all posts with the “congress hotel” tag