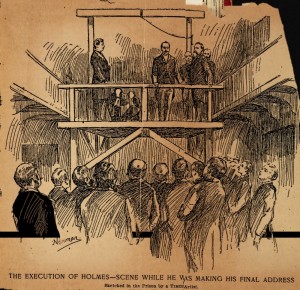 A former employee of serial killer H.H. Holmes swore that he was never really hanged… we examine his claims!

Rumors continue to swirl that H.H. Holmes, subject of Devil in the White City and our most fascinating antique multi-murderer, is going to be exhumed from his grave to address rumors that it wasn’t really HIM who was hanged in May, 1896. Holmes’ descendant Jeff Mudgett’s novel, Bloodstains, suggests as much (Jeff freely admits that the account in the book is a work of fiction that merely presents a plausible scenario).   (note: this post was originally added in 2015; the exhumation began in April, 2017).

This is not a brand-new theory that Jeff invented, though. As early as fall, 1896, there was a lawsuit with Holmes still going on in court, and the plaintiff expressed doubts that Holmes was truly dead (though the judge threw out the suit). And I recently found a couple of January, 1898 articles from the Chicago Daily Inter-Ocean in which a man named Robert Lattimer claimed to have seen letters proving that it wasn’t really Holmes who was hanged in Philadelphia. Lattimer (sometimes spelled Latimer) has a very interesting pedigree as a witness: he not only knew and worked for Holmes, but in April, 1896, Holmes confessed to having murdered him. Holmes’ famous confession included admissions to the murder of several people who weren’t actually dead yet, and Latimer, a former janitor at the famous “murder castle,” was one of them!

According to Lattimer, Holmes had convinced his lawyer, priests, and the jail officials that he was really innocent, and used their belief (and the money he got from writing the phony confession) to get them to go along with a daring scheme. In the scheme, they found a recently-deceased body who looked like him. The substitute body was stashed beneath a hidden partition under the trap door on the gallows, along with two prison employees. When Holmes was brought out to the scaffold, the priests and officials stood in front of him, pretending to tie his arms while they were actually having the other body raised up from beneath the trap door. Then Holmes slipped away, the prison guys propped up the already-dead body (like Weekend at Bernies), and quickly hanged the corpse. Holmes himself slipped into the coffin and escaped from the vault at the cemetery later. By the time the coffin was buried, he was in a New York hotel, and a month later he was living in South America, growing coffee in a small town called San Parinarimbo.

Now, this IS the kind of switcheroo that a decent magician could probably manage. And several people who knew Holmes in Englewood thought the story held up; Charles S. Brown (who once sued Holmes for nonpayment of a loan), told the Inter Ocean that he never believed Holmes was really capable of cold-blooded murder, and also never believed for a second that he’d really been hanged. Others in the neighborhood also expressed a belief that Lattimer wasn’t capable of coming up with such a detailed story all by himself, and that Holmes was such an audacious swindler that they wouldn’t put it past him.

But others in the area weren’t buying it. C.E. Davis worked in the jewelry department of the drug store Holmes ran in the “Murder Castle” building. The building was still there in 1898 (the 1895 fire damaged it but didn’t destroy it, as is commonly written), and Davis was still working there; the Inter Ocean article makes it look as though it was now being called the “Castle Drug Store,” and that he was now managing the place, not just running the jewelry department. He had always provided good copy to the papers, and was the first to suggest turning the place into a tourist attraction. But he didn’t buy the phony hanging. “Holmes is good and dead,” he said. ” Latimer is ‘windy,’ and is always ready to tell wonderful stories if he can find a good listener.”

W.M. McKenzie, who was running the restaurant in the castle building, also didn’t buy it. “I was an officer for seventeen years,” he said. “And I don’t believe that prison officials could be found who would dare to take such risks.”

The letters Lattimer claimed to have seen never seem to have materialized, and a look at the many first-hand accounts of the hanging discredit the tale quickly. There were many witnesses from the press, and when Holmes first mounted the scaffold, he gave a little speech in full view of them. A hood was placed over his face only as he was being pinioned (hoods were absolutely standard at hangings in the 19th century; every account of a judicial hanging I’ve checked, included several others at Moyamensing Prison, used them).

The biggest problem with the  Latimer’s story is the claim that there was a partition blocking anyone from seeing what happened below the trap door on the scaffold, so that no one could see (or smell) two men who were waiting with a dead body to make the swap. Reporters had a very clear view of what happened beneath the scaffold. Several reporters talked about the body dropped and jerking around, and from the various drawings that were made (there were at least three drawings of the scaffold in different papers) it’s pretty apparent that the body would have been in full view at all times. There was no hiding place beneath it.

In fact, the body was hanging, in full view of the reporters, for about half an hour. During that time, several doctors checked for the heartbeat. After it was taken down, the face was partially exposed as officials struggled to get the rope off, and the hood was removed when the body was placed in the casket, exposing the face to at least a couple of reporters. First-hand accounts, in agreement except for minor details, appeared in The Philadelphia Times, Inquirer, Record, Item, Public Ledger, and Item, as well as the Journal, World and Tribune in New York, each of which sent reporters. None reported anything like the execution Latimer described.

The papers differ slightly as to how many people were present, partly because there are some X factors here. The sheriff issued 51 tickets, but prison officials brought 20 or 30 more people, much to the sheriff’s chagrin. And the final number may or may not include the prison officials, priests, etc who were present.

In all, a little under 100 people would have been present at the hanging, including those who worked at the prison. Included in the crowd were several public officials, Detective Geyer, Dr. MacDonald (who’d examined Holmes in his cell), various ex sheriffs, and a great many doctors. Most to all of them would have had to be in on it if Holmes was faking it.

Furthermore, Lattimer said Holmes was living in San Parinarimbo, Paraguay, on a coffee farm, with two women he was supposed to have killed (presumably the Williams sisters). As near as I can tell, that is not even a real place. The story, in a word, was absurd.

(edit in 2017): One possibility is that Lattimer had seen a book/pamphlet entitled Hanged By Proxy: How HH Holmes Cheated the Gallows. Published around the same time, it now survives only as a listing in a copyright catalog; no copy has surfaced. However, excerpts of a newspaper article from the Paris Mercury (Paris, MO) indicate that it was written by L.W. Warner, who shared with Latimer the distinction of having been one of the people Holmes confessed to murdering. He was alive in living in Newton, Iowa at the time.  It’s been noted lately (2017) that the story sold a lot of newspapers, but that’s exaggerating. It was a two day story buried in one local paper.

I am a regular sucker for a faked death theory, so it’s worth noting that a few reporters in attendance DID say that Holmes didn’t look like you might expect him to if you’d only seen pictures. It’s also worth mentioning that no autopsy was performed, just a brief examination to show that the neck was broken. And that having the body encased in cement, as Holmes’s was, IS unusual, to say the least. Holmes motives for wanting to be buried in cement aren’t terribly clear, and the story that he just didn’t want to be dissected isn’t very convincing to me. As a medical student we know from his colleagues that dissecting OTHER people sure didn’t bother him. So, if someone got an exhumation going, I for one would not object. I assume it’s really him in the grave, but I’m very curious as to what sort of shape it would be in. A lot depends on what kind of filler material is in the cement. Also, I really want them to shave the cement down until he looks like Han Solo in carbonite.

Added 2017: In the past week, as the story of the exhumation broke, news accounts have been treating the 1898 stories as though they were a really big story and a popular theory at the time. They were not. It was a two day story in the Inter-Ocean, and not front page news either day. I’m not aware of any other papers picking up their story at all.

For a lot more data on this story and accounts of the execution, including more interviews with Holmes’ friends and neighbors from 1898, listen in to the podcast above, subscribe on itunes, and of course,  (added in 2017): check out my Holmes bio, HH HOLMES: THE TRUE HISTORY OF THE WHITE CITY DEVIL

3 thoughts on “Did H.H. Holmes Fake His Death (new info and podcast!)”