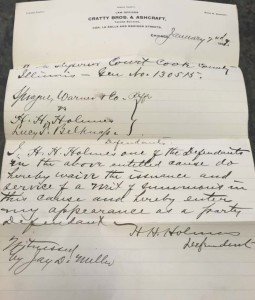 Been a while since there was a new H.H. Holmes post on here, huh? Well, lets dig into the legal archives and pull ourselves up a case. This one puts Holmes into business swindling a wholesale grocery on Michigan Avenue: Sprague, Warner and Co, which stood right on the Northwest corner of Randolph and Michigan – the site of Crain Communications today, just across the corner from “the Bean.”  Not in the same building, obviously. The original is long gone, like most of the other buildings Holmes ever set foot in.

The basics of the lawsuit are this: In January, 1890, one I.C.  Conner took out a handful of promissory notes, borrowing several hundred dollars from Sprague, Warner and Co, with a promise to pay back the Englewood Bank. On the back of each note was a blurb guaranteeing payment signed by Holmes and his mother-in-law.

This would be Icilius C. “Ned” Conner, who had started working for Holmes at the “Castle” building in Fall, 1889 (according to what he later told Chief Badenoch). With him were his wife, Julia, and their daughter, Pearl. Trouble began brewing between the couple, largely because of Holmes himself, who would eventually have a fairly open affair with Julia. The two eventually separated. Ned bought the jewelry store in the castle from Holmes and ran it for a time, but eventually left and went to work elsewhere.  Julia and Pearl remained in a second-floor apartment in the castle, but both vanished without a trace in December, 1891.

It’s generally assumed that Holmes killed them; one of Holmes’s lawyers even told reporters that Holmes admitted to him that he’d killed Julia. Holmes would also confess to having killed Ned’s sister, Gertrude, though doctors at the time were quite certain she’d died of heart failure (she’d been out of Chicago and back at home in Iowa for several weeks at the time of her death, though some still theorize that he used a slow-acting poison – see my master list of known and suspected Holmes victims) 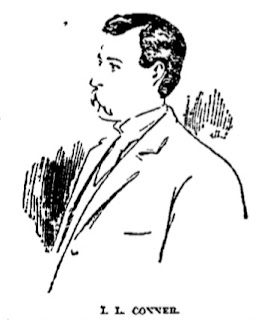 Ned mostly pooh-poohed the stories about Castle, saying that everyone knew about the “secret chamber” (jewelry store clerks used to sleep in it), and that he never heard any particularly mysterious noises, or any particularly suspicious odors besides the “offensive” smell of oil about the place.

Connor continued to run into Holmes from time to time even after his wife had vanished from the face of the earth; he told an Inter-Ocean reporter that he’d spoken about Holmes with Minnie Williams, telling her “(Holmes) is a man I don’t think anything of” (though, when shown photos of Holmes’s suspected victims, he decided that it was Emeline Cigrand he’d spoken to, not Minnie).  Holmes subtly bragged of his affair with Connor’s ex-wife: “He told me something no man on earth could have known had he not been intimate with her; he never could have got the information any other way,” he told Chief Badenoch.

He also had plenty of stories of Holmes trying to get him to buy life insurance, and has the best line of any Holmes victims in this regard: When Holmes’ agent told Ned that he could get a policy for as low as one dollar, Ned said, “If you want a dollar, I’ll give you a dollar, but I don’t want a policy.”

In this particular swindle, Ned seems to have come off all right. When the money wasn’t paid back, Sprague and Warner went after Holmes, not Ned.

Here are some interesting things in the paperwork:

First of all, we have the cover, on which is scrawled “Holmes 701 63rd Street – No such number in Hyde Park. Highest number 569 63rd.”  I’m not sure if this means that the “castle” wasn’t in Hyde Park (it wasn’t) of if the guy serving the papers genuinely couldn’t find the place. It was still just a two story building at the time, but he’d have to be pretty dim to miss it. 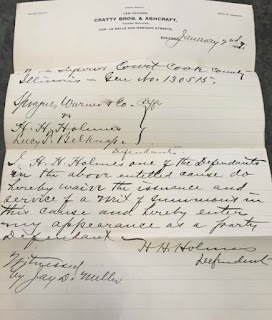 And here we have a letter signed by Holmes – possibly in his own handwriting, though it’s hard to tell. It’d be easier if there were clearly two different pens used, or another signature below his in a wildy different writing. The Hs in the signature are different than the ones in the main writing, so it’s possible either that Holmes wrote the whole thing as some clerk told him what to do, or that a clerk wrote it out and passed the paper and pen over to add his signature. It does pretty well match other Holmes signatures that I’ve seen, but handwriting was taught so rigidly in those days that it can be difficult to tell.

The content of the letter – Holmes entering himself as a party and waiving the right of a writ of summons – indicates to me that the clerk who scrawled the bit above really couldn’t find the place!

It’s worth noting that, while I list this as an address to which Holmes can be traced, Ned seems to have been the one sent out to do the legwork here. Holmes’ actual presence in the building is just sort of assumed here; I imagine he must have cased the joint a bit. He was certainly in the loop a lot.

As a side note, I’ve been running H.H. Holmes tours since 2007. I’ve now teamed up with Atlas Obscura to offer more, and we’ll be announcing a few public dates soon over at Mysterious Chicago Tours!