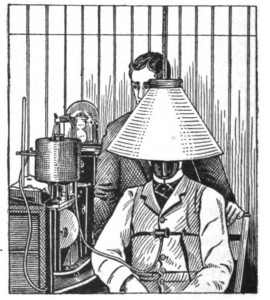 In the middle of researching HH Holmes: The True History of the White City Devil, a podcaster asked me if I’d found everything, or if research was just for completism. If I remember right, I said I was mostly looking for minor details at this point, but you never know what you might find.

Only days later, I made a find that went almost beyond my wildest dreams.

In picking out local Philadelphia coverage of Holmes’ imprisonment as he awaited execution, I ran into several articles about a noted criminologist named Arthur MacDonald (or, in some articles, Alexander MacDonald). He made the news by applying for permission to have Holmes be strapped to a kymographion – a device that measure’s one breathing rate – while he was being hanged.

The application was denied, but MacDonald was allowed to visit Holmes in prison, where he subjected him to all of these wonderful toys:

Most of the data he gathered by subjecting Holmes to these was utterly useless today – they’re barely a step above throwing Holmes in the water and saying he was a witch if he floated.  However, in a couple of the articles about him, MacDonald claimed that he he had been in touch with more than 200 of Holmes’ old associates asking for anecdotes about his character. Now, those, if they were still extant, would be something to see!

Digging deeper on MacDonald, I found that he had published all or part of about 30 of the letters in a book entitled Man or Abnormal Man, in a chapter called “The Case of H.” He didn’t mention Holmes by name (though it’s absolutely obvious that it’s him), which is probably why nothing written about Holmes before seems to use them as a source. Turning the pages and seeing just how many letters there were, my eyes got wider and wider, and I got so excited that I could barely contain myself. This was the kind of find you dream of making!

And, as a source, they’re an absolute treasure trove. The bulk of the letters came from old colleagues and professors from medical school, and give us a much clearer picture than we had before of his college days, his aptitude as a student, his living situation, and his relationship at the time with his firs wife, Clara, and their son, Robert, who lived with him in Ann Arbor for a while. We learn that his college nickname was “Smegma,” details about a breach of promise suit, what his professors thought of him, a lot about his domestic life, and some gruesome anecdotes about his prowess in the dissecting room.

There was also, perhaps most importantly, a letter from Clara Lovering-Mudgett herself, the clearest comment I’ve ever seen from (there were only a few quotes from her in newspapers, and many of them I don’t really buy as reliable). Elsewhere were letters from Marion Hedgepeth, his old cellmate, a childhood neighbor, Carrie Pitezel’s father, a castle resident, and more.

Of course, 30 letters is not 200. Perhaps MacDonald was exaggerating, but perhaps there are another 170 out there yet. I’ve checked with a university library that has his archives, but the search came up empty.

I wound up quoting them at length and referring to them frequently in HH Holmes: The True History of the White City Devil, but it was too big a find to simply sit on and refer to. Hence, I’ve included all of them (with notes on who the anonymous writer was, when I could identify them) as an appendix in Very Truly Yours, HH Holmes, a new ebook collection of Holmes letters, writings, confessions, affidavits and more. It’s sort of a supplement to the official book, containing 150k words (about 700 pages!) of data, all either primary source material on Holmes or an important contemporary document that helped the legend grow (such as the New York World’s phony version of his forthcoming confession). Most of them have not been republished in over a century, and many of the cross-examinations, legal statements, and affidavits have never been publicly available at all. Check it out!