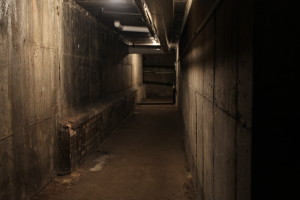 Hi, folks! We’re gearing up for a busy spring. Our screening of the 1916 Essanay Sherlock Holmes film was a sell-out, and we’re cooking up more cool events all the time. March 26 is our next H.H. Holmes “Devil in the White City: Myth and Mystery” tour , and I’m finishing up the draft of my massive H.H. Holmes book for Sky Horse –  so what better time to get around to posting my “basement walk-through?”

The Holmes “murder castle” was there longer than people tend to think it was – the 1895 fire didn’t burn it to the ground, as many books say. In fact, it was there another 40+ years before the government bought it and tore it down to make room for a post office. There’s only a little bit of overlap between the footprints of the two buildings (as seen here), but there’ve always been rumors that there’s still some stuff down in the basement from the original. Could it be true?

I’ve been down there twice, once in 2012 and once this past February, both times with TV crews.  There’s nothing down there that I really think is original, but there’s some neat stuff, and I love poking around old buildings. It’s a fun adventure every time!

This time I managed to explore far futher than I did the first time, and, I’ve put together a walk-through showing what it’s like down there: 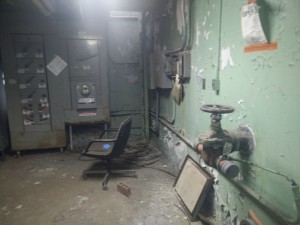 On the wall is a hole you can climb into that leads to some tunnels. This is where there are some bricks that look old enough to be original “castle” bricks, but they’re probably outside the footprint of the old building:

At the end of that there’s a left-hand turn that leads to another tunnel. This is probably the only part of the basement that overlaps with the original “castle” basement footprint. It’s not the same walls, but you’re in the same airspace, roughly in the place where Mr. Chappell told police they’d find a bleach tank (though they didn’t):

Now, a quick word about what the “Castle” basement was like – it wasn’t much more than an unfinished basement. They did find some bones down there, some of which were quite likely the bones of Pearl Conner, an early victim, but the others were likely soup bones. Stories about there being torture devices in there didn’t come around until the 1940s, the tank they said was an “acid vat” at first just had a bucket of crude petroleum in it, and if there was ever a crematory in there, it was gone by the time the investigations started. It was really just an unfinished basement full of junk that looked about like this:

But what’s neat is that when you turn the corner from Tunnel 2, you come to a large space under the front of the post office that looks a LOT like the basement did. It doesn’t photograph well, but here’re some shots: 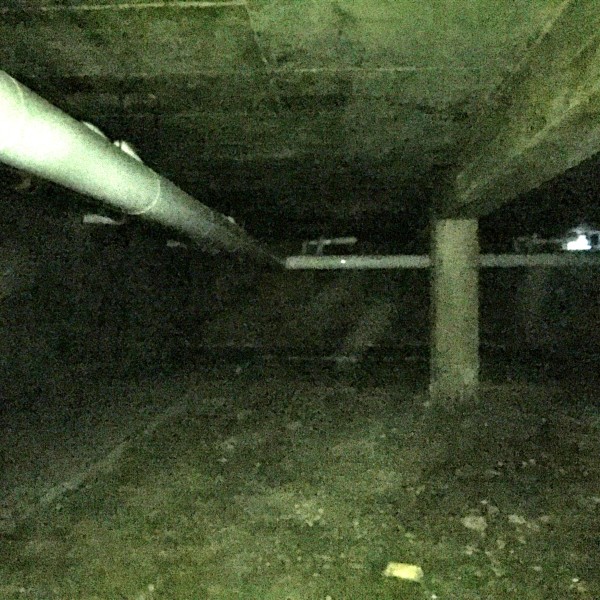 Cement around the edges, articificial dirt of some sort (probably something to do with fireproofing) in the middle. I’d say it’s roughly the size of a tennis court, with a ceiling low enough that a person of average size has to stoop down a bit. No lighting, except from a couple of transoms leading outside.

Lots of rubble there, including old stone samples, industrial junk, window screens, and, my favorite – The Mop Wringer of Death:

This space is well outside the castle footprint, but poking around down there, you really DO feel like Detective Norton and the crew digging around in the dark, looking for “clews.” You see a pipe and think “murder weapon.” You see a bit of stained cloth and think “bloody dress.” Quite a bit of what happened in 1895 was like that, really – for a couple of weeks the new, vastly underqualified chief of police bragged that EVERYTHING was a clue and thought he’d solved every unsolved murder of the last few years. The chief, John Badenoch, had been on the job about two months; he was a political appointee with no experience or training in law, law enforcement, police work, forensics, or anything like that. He was a flour and feed dealer. Newspapers went along for the ride, though after a couple of weeks the papers turned on the cops after one theory after another had come out to nothing. A few people probably were killed in the building from 1891-3, but the cops found nothing that could have convicted him.

Beyond the “field” is another couple of tunnels roughly identical to the first two, with a similar wall of older bricks (which makes the other ones even less likely to be original, really), and more rubble, including a dead cat, some industrial equipment, and an empty Tropicana Twister bottle. According to a sign on the other side of the grate, this is the section that was intended for use as a bomb shelter during the cold war; the front door of the post office still has a fallout shelter sign.

Again I can’t access the basement for tour groups. But I know people want to see what it’s like down there. Hence the video!

Check out the upcoming Holmes tour – save a few bucks if you take the Unsolved Mysteries tour immediately following! Private tours available all the time.

Here’s the video trailer for my Holmes tours: