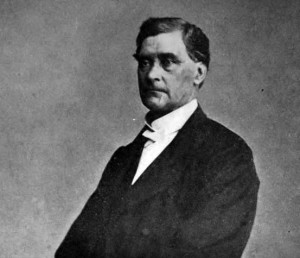 Of the many fascinating characters who grace Chicago history, but didn’t really make the history books, few had quite as storied or interesting a career as Dr. Charles Volney Dyer, an Underground Railroad Conductor, vampire witness, anatomist, cemetery founder, comic, and all around ass-kicker. He’s one of the most recent rabbit-holes I’ve fallen down recently, and though I’m still gathering info, the announcement that Harriet Tubman will soon grace the $20 bill has people talking about the underground railroad, so it seems an opportune time to talk about Dr. Dyer.

Dyer settled in Chicago very early in 1835; by the age of the 30 he was the town clerk. In 1840, when John Stone became the first man hanged in Chicago, his body was given over to Dr. Dyer to dissect.

A friend of Abraham Lincoln, he was perhaps the city’s first prominent abolitionist, and it wasn’t just a theory to him: he used to shelter fugitive slaves in his home when they were on their way to freedom in Canada – by some estimates over a thousand of them. An 1868 biographical sketch says that he and the other leaders in the Chicago underground railroad “assisted in rescuing over a thousand panting fugitives from the odious wretches who, under the shield of law, hunted down God’s creatures innocent of crime.”  He was known to hide slaves in the Tremont House (the same hotel where both Lincoln and John Wilkes Booth stayed) and to sneak them in among cargo on train cars. He was once nicknamed “President of the Illinois Underground Railroad.”

On one occasion in 1846, a slave-owner recaptured a slave that Dyer had been sheltering and took him to the Mansion House, a downtown hotel, where he was held under guard until a blacksmith could be found to attach new manacles to his arms. Dyer broke into the room, cut the ropes, and helped the young soon-to-be-former-slave out the window, then calmly walked out onto the street, where the slave owner accosted him with a bowie knife. Dyer, ready for action, busted his cane over the man’s head. Grateful friends chipped in to buy him a new one, which is supposedly in the collection of the Chicago Historical Society, though I couldn’t find anything in their catalog about it. According to an 1870s Tribune article it was engraved with the phrase “Sic Semper Tyranis,” which would not have seemed ironic in 1846, nearly twenty years before John Wilkes Booth shouted it after shooting Lincoln.

Two years later, a fugitive slave from Missouri was on trial, and Dyer stalled things with a technicality, stating that nothing had been shown to the court proving that slavery was established in Missouri. While the court waited for such proof to be procured, Dyer helped the fugitive escape out the window, where a waiting crowd carried him away. When a constable pulled both a bowie knife and revolver to threaten Dyer, he said “You are more deserving of arrest for displaying such cutlery in the street without a license.” The constable withdrew and the fugitive, so far as is known, escaped successfully.

Dyer didn’t remain a physician long; after selling land he had bought in Chicago for a few hundred dollars a year years earlier for forty-six thousand, he pretty much retired, though in 1863 President Lincoln sent him to Africa after appointing him Judge of Mixed Court for the Suppression of the African Slave Trade.

I also mentioned that he was a “vampire witness.” In the 19th century, there was a superstition (or pseudo-scientific belief) that when a person died of tuberculosis, they could infect their family from beyond the grave. Now and then a body would be exhumed, and a few internal organs burned, in attempt to stop the spread of the disease.It was more of a New England thing (with Mercy Brown being the most famous case), but is known to have happened once in Chicago. About all that is known of this case, though, simply comes from the fact that Charles V. Dyer told demonology expert Moncure Conway about it. It may be this story that led Dyer to decide a better cemetery was needed; he was one of the founders of Rosehill (though he’s buried at Oakwoods).

Dyer was known  as a firebrand and a comic; friends said he would have used his last breath for a pun. The biographical sketch stated that he would attack shams, imposters, and hypcrites viciously, and said that “When he opens his magazines of ridicule, sarcasm, and invective, nothing but absolute stupidity or the epidermis of a rhinoceros can survive the onslaught.”  One example given was that he was once at a fourth of july celebration in Europe, and several British officers were present. After bashing President Lincoln a bit, one officer offered a toast to the Queen, with the common line that “The sun never sets on her dominions.” Dyer quickly responded with “That’s because the Lord can’t trust an Englishman in the dark.”

Another joke that survived: after buying some property just north of the old City Cemetery, he quipped that “I have secured a home beyond the grave.”