All autumn, I’ve had kids asking me about “Slender Man,” a supernatural creature in which they seem to half-believe. It’s the new generation’s Bloody Mary (though they certainly still seem to know about her).

From what I can see, Slender Man, descirbed as a tall guy in a black outfit with no facial features, started out as a sort of internet joke on one of those forums that generate all the memes. Strangely enough, we had a picture of a thing like that about a year ago: 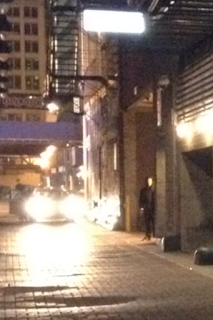 I thought at the time (and still think) that it’s most likely just a blurry pic of a guy who was standing there (though the photographer and a witness both say no one was there). I always try to assume that people didn’t photoshop ghosts in. Certainly they COULD, and there are a million phone apps, but unless I specifically recognize the image all I can do is be good-natured about it (people on tours are my customers, and I can’t go around accusing customers of trying to pull a hoax on me).
In any case, well done, internets: your creation has touched a generation.
(Visited 133 times, 1 visits today)