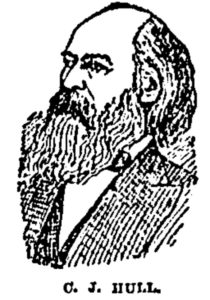 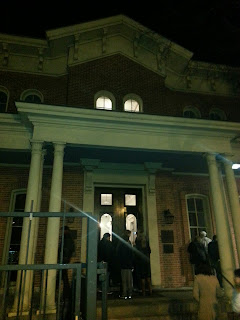 Seeing as how October is coming around, I thought I’d clear up some things people are likely to start hearing about Hull House, the 1856 mansion that Jane Addams turned into a settlement house where she basically invented American social work.  That the house is haunted is a story going back to at least 1889, and some ghost sightings and weird stories there are quite well documented. But stories about the house, and especially the garden/court yard next door, get a bit wild. Most ghostlore and crime lore breeds some exaggerations, and much of it is fairly harmless. There’s no evidence that HH Holmes really tortured people in his basement, but there’s no real harm in thinking he did; it’s not like your besmirching the honor of a good man. However, if you’re going to go around slandering Jane Addams, we’ve got business.

Some stories I get questions about:

1. The garden next door was an Indian burial ground.
Not that anyone knows of. Without extensive archaeological work, we can’t say it for SURE (there were burials all over), but such a dig bringing anything like that up would be a surprise.

2. There used to be a well on the grounds of the garden next door, and  Jane Addams used to throw dead babies and fetuses into it.
Actually, the site next door a garden in Jane’s day at all – there was always a building there. First apparently an undertaking parlor (which ought to be spooky enough), and then a children’s center. Now, there was at least one baby who died in the children’s center. This was early in Jane Addams’ time at Hull House, and the original plan was to have the county bury it. This provoked a HUGE uproar in the neighborhood, cost them a lot of goodwill, and was eventually seen by Addams as a big mistake on their part, and a big failure to account for the culture of the neighborhood. Even if there was a well there, she would most emphatically not have thrown babies down it. Please, please do not show up at the Hull House museum with a shovel.

3. Jane Addams buried the Devil Baby alive in the garden.
A century ago, in autumn of 1913, a rumor went around the neighborhood that a “devil baby” with red scaly skin, horns, and the ability to swear in three langauges had been born nearby and was being hidden at Hull House. It was all the staff heard about for a good six weeks. This same story went around in a few other cities over the years. There’s no evidence at all that the baby was real, or even that a baby with some sort of deformity inspired the story. And even if there was, Jane Addams would never, ever have buried it alive. Again, please, please do not show up at the Hull House museum with a shovel.

4. Indians performed a “Ghost Dance” on the grounds in 1812 after the Battle of Fort Dearborn to curse the grounds.
The Ghost Dance movement came decades after 1812, for one thing. For another, given that Jane Addams won a Nobel Peace Prize, it would have been a fairly incompetent curse.

5. There’s a ghostly girl named Becky or Rebecca who haunts the house.
In the summer and fall of 2006, we got a LOT of photos on tours of what appeared to be a girl about 8-10 years old. Just, a LOT of them. And good ones, too – the kind that don’t require a lot of imagination to make you think it’s a ghost. No one had ever really talked about a ghostly girl there before, and the photos seemed to stop after about 2007, though I’ve seen one occasionally since then. We have many people who describe themselves as psychic on the tour, and in 2006 two of them said the girl was named Rebecca. For two psychics to tell us the same thing is pretty unusual, so we sort of went with it. The story has snowballed a bit over the years. I’ve never found good documentation of a girl named Rebecca – or, indeed, any girl that age – dying there.

6. The “haunted room” was really a “smush room.”
This is one that a few people have speculated on – that the real source of the “rustling noises” in the room Addams herself called “the haunted room” was really just lesbians having sex, and the “ghost” story was something they made up to cover for it. The exact nature of Addams’ relationship with Mary Rozet Smith, with whom she was spending a night in the room when she claimed to see a mysterious woman in a rustling dress, is up to speculation, and I’m in no position to say with any confidence what went on in their shared bed. However, a few of the stories about the haunted room and the woman in the rustling dress can’t be explained away with this explanation, and it’s all in the realm of speculation, anyway.

That said, here’s a basic rundown of some true stuff (much more is in the book linked in the banner at the bottom):

1. The grounds where the garden now stands was the site an an undertaking parlor when Addams moved in, and eventually was the site of the Hull House children’s center. At least one baby died there.

2. The house itself is probably the place where Millicent Hull died. Charles, her husband, was a spiritualist, so it isn’t impossible that he was holding seances in there in the 1860s. One of his sons may have died there as well (his other children died elsewhere).

3. In the 1870s, the house served as a home for the elderly run by a group of nuns. Many people died there in those days.

4. There was one bedroom that even Jane Addams herself referred to as “The Haunted Room,” and she herself thought she may have seen a ghost there one time – a woman in a rustling dress.

5. Even after taking literally hundreds of tour groups out there, even now I still have nights when I’ll step into the garden and get so freaked out that I step right back out.

6. Though I’m pretty conversant with all the things that can generate false positives here (various things like lamps and fireplace mantels can look remarkably like feminine forms in photos taken through the windows), now and then I still see one I truly can’t explain.