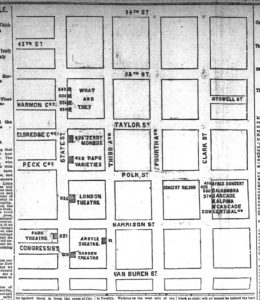 Recently, Valancourt began republishing a bunch of novels by Michael McDowell, who is best known for writing the screenplays to Beetle Juice and Nightmare Before Christmas. Mostly forgotten, his horror novels are fantastic books that deserve to be among the first rediscovered as readers start sifting through the rubble of the 80s-90s horror boom. I’ve been devouring them. While the six part Blackwater saga is probably his masterpiece, I particularly liked the hilariously gory The Amulet, which manages to be a dark meditation on the legacy of the Vietnam War, insanely gruesome, AND extremely funny. But my favorite is Gilded Needles, about one aristocratic family and one criminal family in Victorian New York.

In Gilded Needles, one of the aristocratic guys writes a series of articles for a newspaper about a neighborhood in lower Manhattan (where Soho is now) called The Black Triangle – the articles run alongside sermons about the crime and sin-infested area. Though there were certainly neighborhoods like that in New York, I couldn’t find anything specific about a place called The Black Triangle. And I wish McDowell was still alive so that I could ask if he’d seen the Chicago Daily Inter-Ocean articles about the area they called The Black Hole, which are exactly like the articles he describes.

We had a lot of “vice districts” in Chicago over the years, and mapping them out isn’t usually an exact science. One can find any number of articles plotting out the areas known as Cheyenne, Little Hell, Bed Bug Row, Hell’s Half Acre, The Levee, Satan’s Mile, Whiskey Row, etc. After all, even “official” neighborhoods don’t have strictly designated boundaries most of the time; I’ve seen my own neighborhood listed as River West, West Loop, Ukranian Village, Noble Square, West Town or Wicker Park, depending on how any given realtor wants to market it. A realtor might say an apartment is in “West Bucktown” and mean just about anything east of, say, Cicero Avenue.  This is hardly unique to Chicago; in Los Angeles a real estate listing saying “Studio City-adjacent” can mean you’re in Mexico.

But with The Black Hole, we have a specific map, published right at the time, giving a distinct area. It overlaps some with The Levee, Whiskey Row, and other unsavory places – and might well have been largely an invention of the reporter.

The Inter-Ocean began writing of The Black Hole in a series of articles beginning in 1882. In the area bounded by State and LaSalle at the east and west, and by Van Buren and 14th at the North and South, they said there were roughly 400 saloons, 200 “houses of ill-fame,” 50 or 60 pool halls, and several “variety theatres” and “concert halls” that they considered the worst of the lot. They also claimed that at least 3000 “abandoned women” (prostitutes) lived there.  It was an area “where more souls are given to the devil annually than we can dream of.”  “By day,” they wrote, “it is a plague spot. By night, it is a hell.”

Now, how seriously we should take these claims is hard to tell; just looking at the map it seems like it would be hard to fit them all in, and that 3000 women could hardly be enough to provide employee for the number of brothels they counted.  And, throughout the articles, there are broad hints that the authors know that the stories won’t stand up to fact-checking.

For instance, the author declines to say what, exactly, is so shocking about the place. Early on in the first article, they note that “It would need a graphic pen to depict in all their horrid outlines the dark side of Chicago city life. In doing this one should not lose sight of the fact that he must not outrage public taste. For to describe crime and sin in a way that would pander to a morbid curiosity on the part of those whose only delight in such reading is to learn something more of ‘ways that are dark and tricks that are vain’ would do no good whatsoever.”

The reporter also noted early on that if someone came to check the area out for themselves, they’d probably think he was exaggerating, and tried to defend against such claims right from the start: “The respectable citizen, who does the correctness of this article,” he wrote, “cannot do better than himself to go over the ground which has been mapped out. He will see enough to surprise and disgust him but he will not see all. The reason why he will not see all may be told right here. The proprietor of a den wherin exists that which should not be is no man’s fool. He is a good judge of human nature, and can at sight tell the difference between a man who comes to spy upon him and a man who comes to ‘see the elephant’ and pay for it.”

Hence, the reporter helpfully volunteered to go around to various “dens” as a paying customer, beginning with a few of the small shops that dotted the area, which he referred to as “dago dens” (it’s worth noting that the writer was racist as all get out; the line about “ways that are dark” is from a common anti-Chinese poem from the era). “The dago,” he wrote, “always speaks very bad English. He has no heart, no conscience.” These shops were mostly small versions of what we’d now call bodegas, usually with a rudimentary bar attached. The reporter assumed they were all fronts for brothels.

But worse than such “dens” were the variety theaters, where one would see “Tier on tier of women, some of them shapely enough, and never a skirt in the party.”  And “worse immeasurably” than the variety show was the concert saloons, most of which were essentially “open mic” affairs where volunteers would sing songs at the piano. “The proprietor of the place is never known to smile. The waiters are saturnine and insolent. How any one can go to such a place for amusement is a mystery. There is no amusement there. The idiotic songs fall on deaf ears….these places are nothing more than assignation houses where the courtesans meet their friends and count the gains of their last venture, and plan new schemes of crime.”

Now, keep in mind, this is 1882. I can only imagine what this guy would have thought of the jazz clubs that came up a generation later!

Since it’s to be assumed that the stories were exaggerated, one has to wonder why the reporter would go to such lengths to make the area look bad. One reason was to drum up business and prestige for the pastors who sermons against the neighborhood were printed alongside the articles. More importantly, though, they were supposed to make mayor Carter Harrison look bad. After all, Harrison was a democrat, and the Inter-Ocean was a proudly republican paper. “Suppressed under Republican administrations, (these places) always flourish as soon as a Democrat takes hold for a term.” They went on to say that every single low-down establishment and den of thieves had a portrait of the mayor on the wall.

This was, of course, a ridiculous claim, but a Democratic paper probably would have said the same about a Republican mayor (and been just as racist while doing so). Trying to connect the modern parties to their Victorian roots is a fool’s errand – what positions were liberal vs conservative then, and which party was which, simply don’t always line up with modern times.

Really, the Inter-Ocean seems to have been the only place that called this area The Black Hole. Other sources divided it up into other luridly-named neighborhoods – one really can’t overstate the extent to which the articles about it were largely about publicity and politics.  But they weren’t just making up stories outright- right in the midst of the area was Carrie Watson’s famous “resort,” after all, and as late as the early 20th century one can find reports of judges refusing to prosecute criminals who worked the area because men who went there and got robbed should have known better than to go there in the first place.

It’s always hard to know just how seriously to take stories about these neighborhoods when one reads them now. Many stories one sees about historical vice today come from 1940s pulp retellings that were probably at least half fiction (Herbert Asbury’s Gangs of Chicago, alias Gem of the Prairie, tends to be a particular culprit; Asbury wrote really entertaining history but wasn’t shy about repeating hearsay, or even making things up outright). Sometimes the stories about these places came from reporters and politicians who were just telling wild tales to score political points (or, perhaps more often, fire up people’s racial prejudices and sense of moral outrage).  And, of course, this continued to happen into the years – just as the Inter Ocean guy said every criminal had a portrait of Mayor Harrison, 50 years later similar Frank Loesch, head of the Chicago Crime Commission, claimed, in some versions of his story of meeting Al Capone, that Capone had a picture of Mayor Thompson on the wall.

– how many people on TV have you seen saying that we Chicagoans can’t walk to a grocery store without getting shot?

The more things change, the more they stay the same!