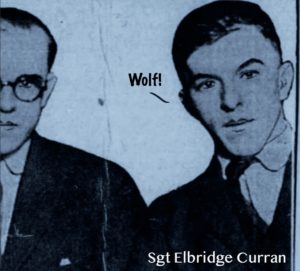 Listen above, on archive.org, or iTunes. Or see more podcasts!

Pictured above is Officer Curran. In 1925, he was working the desk at the County Building, where gangsters John Scalisi and Albert Anselmi had just been brought in . They’d been arrested after a chaotic day in which they’d gone out with Mike Genna to shoot Bugs Moran. Genna himself ended up being killed along with two cops, in one of Gangland Chicago’s busiest and most chaotic days – it would later be said that Scalisi and Anselmi were really working for Capone (they certainly would later) and had secretly been planning to kill Mike Genna, not Moran, the whole time.

People in the county building heard the sound of two gunshots, and Sgt. Elbridge H. Curran told everyone that a bushy-haired man with a “swarthy” complexion had come in and shot at him, possibly mistaking him for State’s Attorney Crowe, who was going to be prosecuting Scalisi and Anselmi.  He believed that the gunman had escaped into the freight tunnels, the 60+ mile network of tunnels forty feet below the loop that connected every major building. There were countless nooks and crannies where a man could hide, and lots of ways that he could steal food from loading docks. A man could have lived there in hiding for months. 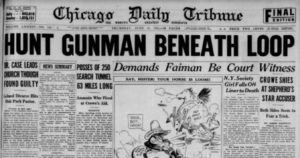 The 1925 manhunt in the tunnels has been written about many times – including a few articles and books that I wrote myself. Papers all over the country covered the it. But they mostly went quiet about it the next day, and never published the results. I always assumed that they gave up on looking for him and assumed he’d left the tunnels and gotten away; the gangster specifically suspected of being the fugitive, Tony Spano, was shot to death in a barber’s chair the next year.

Forty-eight hours later, when the tunnel hunt was winding down, Curran burst into the Maxwell Street police station to announce that he’d been shot at in his patrol car at 18th and Loomis. But after a bit of questioning, he admitted that not only had he made up the whole thing about the guy in the tunnels, but he’d shot the bullet holes into the patrol car himself. It was all just for publicity.

And it wasn’t even the first time he’d done this sort of thing. Early in his career, four years before, he’d announced that some giant robber had beaten him up, and there was a manhunt for that guy. In 1923 he said he’d been chased by a car full of gangsters who sprayed him with bullets before driving off.  And now they’d put 250 officers with tear gas bombs onto a dangerous manhunt, all because he wanted to be famous.

And so, Sgt Curran was…. temporarily suspended. That’s the craziest thing – dude was put BACK on the force after a short suspension, and stayed there, continuing to do the same stuff, for at least another six years before he was suspended in 1931 for showing up drunk (which, besides being against the code of conduct, was still illegal in 1931). After that he drops from the news, from what I can find. He died in 1948. Listen to the podcast above for more details, and watch for his story to come up on the new Effing Chicago gangster tours, which are coming soon!