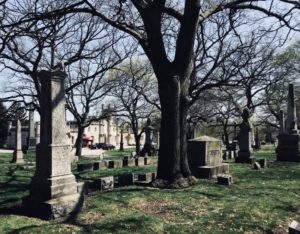 The proper name of Rosehill Cemetery is up to some debate. Though most official paperwork gives it as a single word, Rosehill, it’s not uncommon to see it written as Rose Hill. And several popular stories claim that the name was supposed to be Roe’s Hill, and only a clerical error resulted in the name we know today. People ask me about it on tours all the time.

The oft-given story is that the land, seven miles north of downtown Chicago,  was once a farm (or tavern) owned by a stubborn old pioneer named Hiram Roe. When someone wanted to buy the land from the old man for a cemetery in 1859, stubborn old Mr. Roe only agreed when the buyer promised to name the cemetery after him – but a clerical error resulted in it being named Rosehill instead. I love to imagine Old Man Roe sitting there on opening day, gnashing his teeth and sipping his homemade whiskey from a brown bag while wealthy Chicagoans sat through the speeches and picked out their plots.

But, while there’s reason to believe Roe was a real person, the story of him wanting to have the cemetery named after him is certainly fiction. The land wasn’t bought from him, and wasn’t intended to be a cemetery when it was first purchased.

Lawsuit records recorded in The Northeastern Reporter in 1895, when a suit over payments was going on, elucidates the whole story of how the land changed hands: In 1857, Francis H. Benson bought the land where the cemetery now sits, then in the surburban town of Chittenden, for about $25,000 from the Illinois and Wisconsin Land Company. He intended to parcel it out into lots for houses, but the Panic of 1857 hit the economy hard, causing the land to lose about half its value and decimating the market for suburban real estate. The only money Benson made from the land in the first year came from selling off a bit of gravel he found on it.

But the dryness of the soil (it was a high elevation) made Benson think some of the land would make a good cemetery, so he partnered with James V.Z. Blaney, first president of Rosehill, to form the Rosehill Cemetery corporation.  The company was incorporated in February, 1859, and the cemetery opened for business that summer. Benson and Blaney’s names are both carved onto the gate. When the cemetery published a promotional book in 1913, they said that the name came from wild white roses that grew on the hill.

But the story that the name of the cemetery may have grown from a hill named for Mr. Roe may not be entirely fanciful; while the “stubborn farmer who owned the land” tales are of decidedly modern vintage (probably just the last couple of decades), stories that the land was once called Roe’s Hill appear in several 19th century sources.

The first mention  that I can find comes from just over 20 years after the cemetery was chartered, when the Chicago Tribune ran an article about onion farming on September 6, 1880. In the article, it said that in the early days of Chicago history, teamsters traveling in the woods seven miles north of town would often stop at the “Jug Tavern” owned by “old Man Roe,” who made a sort of whiskey that was popular enough for its fame to make them start referring to the area as Roe’s Hill.

A few years later, A.T. Andreas’ authoritative History of Cook County  mentioned this as well, stating that the area of Bowmanville was once known as Roe’s Hill for Hiram Roe, whose cabin and tavern were near the current residence of one J.A. Budlong.

The Tribune mentioned Roe again in 1900, when an article on the origins of the names of various suburbs said that Bowmanville was originaly known as Roe’s Hill after Hiram Roe, “the pioneer settler (who) sold whiskey there of no uncertain proof.”

However, census records say nothing about a Hiram Roe in the area. There was a farmer named Hiram Rowe up near McHenry in those days, but I couldn’t find any evidence that he ever lived closer to the city.  Furthermore, these mentions that the area was called “Roe’s Hill” in the old days (1830s-1850s) are all from a few decades later; no instance of anyone calling it Roe’s Hill in the actual “old days” has yet been found (though I’ve heard rumors about it being in some early Rosehill documents). Andreas and the Tribune may have just been repeating neighborhood gossip and urban legends.

Perhaps the tale that Rosehill was Roe’s Hill may have all been a misunderstanding; In 1856, Robert Ferguson wrote a book on Danish and Norse names in Scotland, and said that a Rose Hill in the U.K. was, he believed properly Roe’s Hill, from the Old Norse word for “King.”  Perhaps someone heard that bit and thought it applied to the Rosehill in Chicago.

Still, the fact that sources knew the full name and even the location of the tavern make it look as though there was a kernel of truth in the story someplace. So, Old Man Hiram Roe remains a bit of a mystery; I spoke to Larry, a fellow tour guide who works at Rose Hill, and he said he’d pored through all of the oldest books looking for any mention of Hiram Roe without finding a thing.  “He’s certainly not here now,” he told me.

But was he ever there? The world may never know…

2 thoughts on “Was Rosehill Supposed to be Roe’s Hill?”