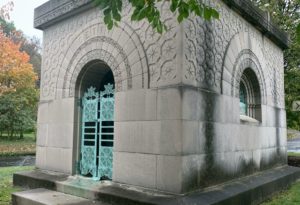 (the following is cross-posted from the Cemetery Mixtape page, which also includes a podcast!)

Every year, thousands of people walk past the landmark Getty tomb in Chicago’s Graceland Cemetery to admire the architecture. Designed by Louis Sullivan, it’s perhaps the most perfect example of Sullivan’s style. Almost no one who sees it realizes that inside lie the remains of one of the most fascinating women in Chicago history – Alice Getty could have starred in adventure serials.

The daughter of lumber baron Henry Getty, after her mother died in the 1880s, Alice, now in her early 20s, began to travel the world, collecting art and curios. She became a noted composer in her 20s (she wrote the song for this episode), then switched gears to become an expert in Buddhist art and history. In 1914 her first scholarly book on the subject was published.

Her studies were interrupted during World War 1; having skipped a passage on the Lusitania’s fateful voyage at the last minute, she settled in Paris during the war and started a publishing house putting out braille books for soldiers who’d been blinded in combat. She was eventually decorated by the French government for this work.

Following the war, she lived in Japan in the mountaintop monastery of a secretive Buddhist sect. She wrote a book about her time there, but before it could be published the only manuscript was lost; it’s thought to have been destroyed when the Nazis took over the village where she was living in France. Fleeing the violence of World War 2, she settled in New York, where she spent the last years of her life with her study partner, Florance Waterbury, studying Illana, the Syrian goddess of love.

For all these broad strokes, though, most of what we know of her life comes from obituaries and articles written thousands of miles from the action. She remains a bit of a phantom – just as likely to star in a serial or to be the person Indiana Jones is looking for! Some pictures:

Hear the podcast, including one of Alice’s songs, over on Cemetery Mixtape!