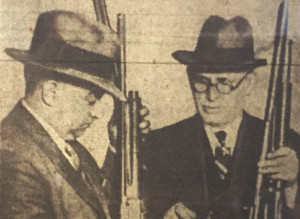 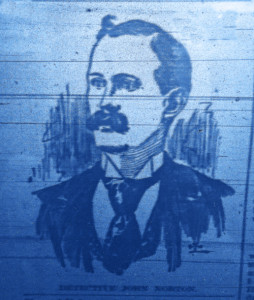 Back when Franklin D. Roosevelt was in his second term as president, an old pickpocket named George Summers spoke to the Tribune about the old days. “You know what’s the matter with the cannon (pocket picking) racket today?” he asked. “Stickups! These young punks ain’t willing to go through a long apprenticeship anymore, like we had to. You had to be good to be a dip…. In my time tailors made mens’ pockets so deep it took 15 seconds for a good man to pinch a poke. Nowadays they’re so shallow it can be done easy in five.”

The first time Summers was arrested was during the 1893 World’s Fair. The detective who’d arrested him, John W. Norton, was still active when Summers made his statement in 1939. When asked why he’d become a detective in the first place, Norton said, “I was a damned fool. Like all kids, I thought it would be grand to be a policeman.”

Though his name comes up in a lot of works on Chicago crimes of the 1920s, none of them seem to realize just how far back the man’s career went. Back in 1895, he was one of two detectives who were in charge of investigating the the “Holmes Castle” on Sixty-Third Street. Later recaps of his career only really talked about the last half of it, so it took me a while to realize that the “Lt. John Norton” mentioned in so many cases of the 1910s and 20s, and who became Chief of Detectives from 1930-32, was the same “Detective Norton” papers were always talking about during the Holmes case!

To say Norton had a long and fruitful career barely hints at things.  Just a brief overview:

In 1889, Norton made the news for the first time after arresting a member of a coal-burning gang who’d been on the run for nine months. Not yet with the police, he was working as a private detective for a railroad company at the time.

In 1892, now with the Chicago Police, Norton was involved in a fierce battle with pickpockets at Clark and Madison. Having caught one, another pointed a gun at Norton’s head and said “let the fellow go, or I’ll blow your brains out.” Norton knocked the gun aside and managed to draw his own, wounding the would-be killer (and getting smashed on the head in the process). This was the first of many wounds he sustained on the job.

In 1893, he made national news for his attempt to capture Barney Burch, a notable pickpocket, who escaped by throwing red pepper in Norton’s eyes.

In 1895, Detective Sgt. Norton and Inspector Fitzpatrick supervised the explorations of the HH Holmes “murder castle.” Of the two, he comes off better; Fitzpatrick was far more apt to see a rope and assuming there must have been hangings. Norton seems a bit more cautious.

In 1920, when Big Jim Colosimo was killed, Norton was the one sent to interview the widow, Dale Winter.

Also in 1920, he was instrumental in getting Carl Wanderer to confess that he’d set up the whole “ragged stranger” case.

And that same year, he was on the squad that took down the Cardinella Gang.

In 1926, when asst. state’s attorney William McSwiggin was shot to death in a drive-by (along with members of the O’Donnell gang, with whom he was hanging out for reasons never entirely clear), police raided all sorts of known Capone hideouts. Norton was on the raid at Capone’s brother’s place that uncovered a whole arsenal full of weapons. Rifles were disguised as curtain rods.

1930, he was made chief of detectives (replacing a man J. Edgar Hoover said was getting give grand a month from Capone), in in 1931 was in charge of such duties as controlling the crowds outside of Capone’s trial.

In 1940, when he retired after more than 50 years as a detective, with over 100 citations for bravery to his name, he’d been serving as  commander of the Maxwell Street Police Station.

Now, I don’t want to go overboard with calling the guy a “hero.”  The 50 years that Norton was with the force are not exactly 50 proud years in Chicago police history; it was a long era of corruption, incompetence, and police brutality. The Maxwell Street Station he commanded, in fact, has a particularly grim repuation. And Norton was sort of an old-fasioned detective – a bit more likely to use his billy club than his magnifying glass.  “I am not of the Sherlock Holmes type,” he once said. “(But) I consider myself a close student of crime. I have made the running down of criminals my business. Then, too, it is a pleasure to me. It is almost my whole enjoyment, and to work overtime is no hardship… I do not want it understood that I have no faith in the theory of deduction; I have the greatest faith in it, but I consider it secondary to the plain methods of police work.”

But Norton was only rarely accused of forcing a confession out of anyone (which, in context, is a pretty good record), and I’ve never found anything about him being on the take during prohibition, or any other charges of corruption, which is almost a miracle, given his era. It just amazes me that the same man worked against both H.H. Holmes and Al Capone!